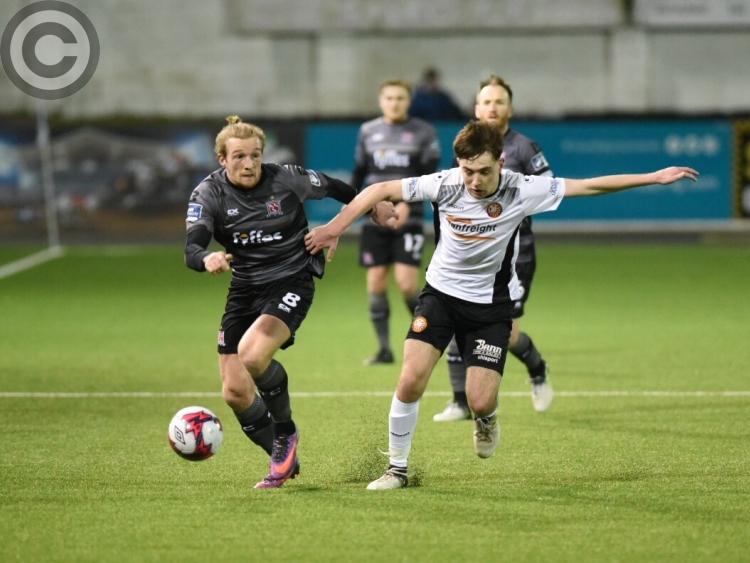 Sam Byrne's hat-trick was the highlight of tonight's friendly encounter between Dundalk and Portadown at Oriel Park.

The former Manchester United man, playing in a midfield capacity alongside 'skipper Stephen O'Donnell, struck twice before the break, cancelling out Peter Duffin's early opener for the Irish Championship side, before turning up his three-goal haul after half-time as The Lilywhites eased to victory.

It was a completely changed Dundalk line-up from the one which defeated Waterford on Friday night. Georgie Poynton and Byrne returned after spells on the sidelines, while recent additions Stephen Folan, Dean Jarvis, Krisztián Adorján and Marco Tagbajumi were given chances to impress Stephen Kenny; who opted to watch the first half from the stand.

Duffin opened the scoring, shooting across and beneath the diving Gabriel Sava after 12 minutes. The build-up saw the Ports play a ball through the home defence, something which they were allowed to do on a few occasions during the night.

But the Armagh side, now under the stewardship of former Dundalk striker Matthew Tipton, wasted glorious chances either side of half-time through Stefan Lavery and substitute Ryan Latifi as Sava made-up for his earlier concession.

Byrne, with his collection of turns and a searing turn of pace, came to the fore midway through the opening half as he started and finished a move which drew Dundalk on level terms. The ball broke to him on the edge of the area after Adorján's shot had been blocked and the Dubliner duly toe-poked to the bottom corner.

His second involved no such good fortune as, having picked the ball up from deep, he played a one-two with Adorján before rifling past the helpless Chris McGaughey with the aid of a slight deflection.

And goal number three summed up Byrne in a nutshell. Breaking in behind the Portadown cover with an incisive dart from midfield, he collected a through ball before neatly rounding Ruadhan McKenna - now in the visiting goal - and sliding right-footed to the empty net.

Kenny eventually called Byrne ashore a minute from time as the crowd of a few hundred gave him a decent round of applause. On this evidence, Oriel Park will be seeing a lot more of the 22-year-old in the weeks to come!