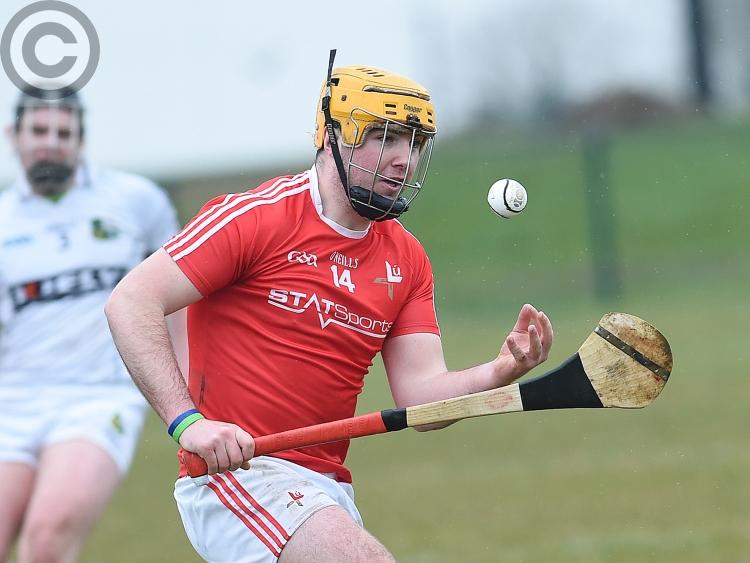 The previous record had been set by Cork legend Christy Ring in November 1959 when the eight-time All-Ireland winner registered 6-4 in an encounter with Wexford.

Though Arthur's tally falls short of the championship record posted by Nicky Rackard in 1954 (7-7), his achievement remains staggering considering it was only his third game for the Reds.

A native of County Clare, the Inagh-Kilnamona , alongside brother Gerry, has been largely responsible for Louth's three-game unbeaten run since his arrival. His debut saw him rattle in 2-9 against Tyrone, while he finished the round three clash with Warwickshire on 0-11, bringing his overall tally in Wee County colours to 6-32.

Reacting to the news of his record, Arthur was surprisingly keen to play it down, even though he admits that it will be something that he will always have. Coming off the field, he knew the tally was exceptional, however, the record certainly never entered his thinking.

"No, definitely not. Although one of my mates from college was saying in one of my WhatsApp groups, surely, he said, that's a record of some sort. One of the others said that it's surely a first for a Louth GAA player. That was kind of the start of it. I genuinely didn't realise it myself.

"To be honest, I didn't really think about it (when the history was revealed on The Democrat's website). It was doing the rounds on facebook and I did have a glance down through it, as you would, but I didn't really pay much heed to it. Obviously, it's nice and something that will be with me forever.

"It was made a lot easier by the brother in fairness. Gerry and Mark Molloy at midfield, they gave me some fantastic ball into my hand, particularly Gerry. There's a great understanding between the two of us and he makes my job a lot easier," Arthur said.

His parents are "delighted" with the record, especially considering they were present to see it alongside Niall's twin sister and nephew. It was the first time the Arthur convoy had travelled to see the boys playing for the Wee County.

But watching them feature on the inter-county hurling scene is something that their family are well accustomed to, while record-breaking appears to be a hobby for the Arthur brothers.

Their journey to playing for Louth has been one familiar to many a Munsterman who has moved to different parts of the country following work. A teacher at Donacarney Boys National School, where he teaches class, Niall is currently residing in Piperstown, just outside Termonfeckin. Gerry, who is due to go travelling for two years in September, in Edenmore, Co. Dublin.

The pair hurled in the capital for three years with O'Toole's to get a break from the arduous weekend trek back to home to Inagh for training. They had originally settled on the move for two years, however, they, Niall in particular, felt there was a chance of a county championship success, only for the Ayrfield club to fall short in two semi-finals.

There had been rumours throughout their time in Dublin that the county team manager, Ger Cunningham, had been keeping tabs on them, though nothing ever came of the talk. Instead, they arrived at the decision to declare for Louth, perhaps in an attempt to repay a man who has supported them ever since they moved to the north-east.

"John Joe Conneely became involved with the Louth senior hurlers and he said that they were allowed to play three outside hurlers if they were resident in the county of Louth or if they had the grandparents rule. I'm fortunate enough, along with Gerry, to be living in Louth. That's how the move came about," Arthur explained.

"First and foremost, John Joe has been unbelievable to me from day one, since I got the job in Donacarney. He's been absolutely brilliant to me and he used to come to all our matches in Dublin, league or championship. He's a big supporter of ours, he's a big supporter of the family in general and we're great friends so I kind of felt that I was returning him a favour and, to be perfectly honest about it, I wasn't going to be called back into Clare (senior panel) considering I was working up this side of the country so that was a factor (in the decision) as well.

"I was told early on that confidence wasn't hectic (in the camp), but all you need is one big win and we got a massive win against Tyrone when nobody realistically gave us a chance. I even met a few people up locally and other lads who would have been playing with other inter-county teams; they perceived us as being the weakest team in the group.

"We have some fine hurlers in our squad, regardless of Gerry and I, and I noticed that the first day that we went training. I think there are some smashing hurlers, four or five fine hurlers that would be well able to equip themselves at any level, and they're really honest as well. Every night we train, there are very few missing and we have had some tough nights in Darver, some cold, cold nights, but everyone was there and, as I said, there are some fine hurlers right throughout the field. Some of the nicest hurlers that I've ever played with are on our team."

The Arthurs, along with the aforementioned Molloy (a native of Wexford), introduced as Louth's three outside players this year and it's something that Niall is passionate about. He feels the permitted number should be upped from three to maybe even five or six in a bid to strengthen hurling in the so-called weaker counties.

On the topic of strength, the pair transferred back to Inagh-Kilnamona for the season ahead.

"We originally said that we'd be going (to O'Toole's) for two years, just to get a break from the travelling. We were going to go home last year, but we deferred it for one more year because we said that this year, regardless of what we were going with O'Toole's, we were going home.

"Down here in Kilnamona, we have a crop of very good young players coming. There's been a lot of success, a lot of minors (championships) and U21s won in the last couple of years. We have a good few on the Clare seniors at the moment and I think we have nine on the Clare U21 panel so there is the nucleus of a very good team coming down here, we hope anyway, and I'd like to be a part of it in some shape or form."

Manager of their club team this year is former Clare player, Fergal Hegarty, who helped to guide Ballyea to the All-Ireland final last year. He's been most accommodating to the Arthurs, acknowledging the benefits of playing 70-minute matches with Louth as much as his own training programme.

You get a sense from speaking with Niall that he feels something special is brewing in Inagh-Kilnamona as they bid to end their 110-year wait a Clare Senior Championship title. There has been a lot of waiting and pain for Louth at Nicky Rackard level too over the recent decade and beyond. Three Croke Park deciders have been lost, however, with the Arthurs on board, in both the Louth and Inagh-Kilnamona camps, perhaps history will be re-written in 2018.