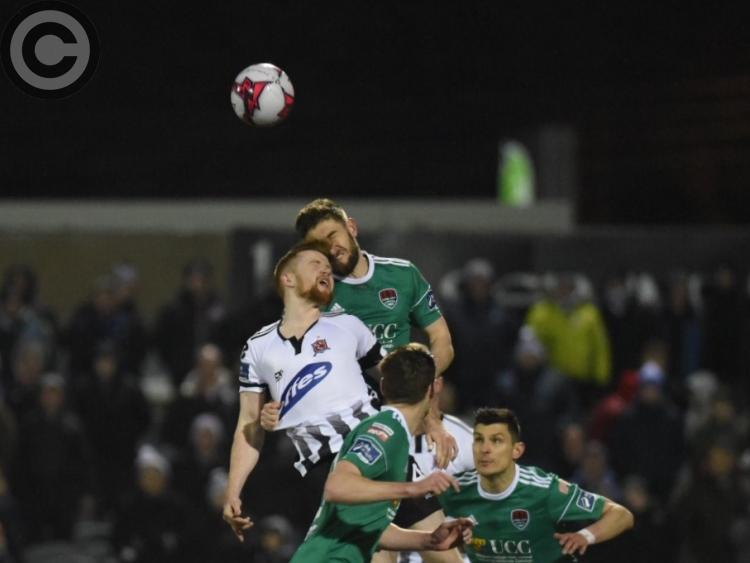 Victories over Cork City have been few and far between for Dundalk FC in recent times, with defeat having been tasted on eight occasions over the past two seasons. However, all week there has been a feeling that such an outcome was going to be avoided this time around and so The Lilywhites delivered on Friday night.

The raucous home following - creating perhaps the best atmosphere Oriel Park has seen in quite a while - only settling down when Patrick Hoban put Stephen Kenny's men ahead with his third goal of the season. Indeed, the opening goal time was four-minutes as the striker nipped in to punish Cork 'keeper Mark McNulty's spillage of Ronan Murray's dipping free-kick.

WATCH:
Pat Hoban fires @DundalkFC 1-0 up after a rare error from Mark McNulty!

It may have proved to be the winner, though the scoreline hardly reflects The Lilywhites' dominance and had Cork found a way through as they pushed bodies forward in the closing minutes, Robbie Benson's second-half penalty miss would have been stewed over in the minds of the Dundalk faithful for many a day to come.

But had things panned out as such, it would have been a great injustice following 90 minutes where the winners were completely dominant. Daniel Cleary, Chris Shields and Hoban, to name but a were incredible on the home side.

Dundalk's start was ferocious as Cork quickly became unnerved with McNulty - a target of much attention for the home supporters - looking far from assured. Their 'skipper, Conor McCormack, wasn't much of a soothing influence either, fouling on four occasions - including in the build-up to the opening goal - before being replaced by Barry McNamee on 21 minutes. It was a case that he was taken off before being sent off!

Shields was key as the hosts maintained their pressure on a rickety-looking Cork back four and while the imperious Duffy almost curled a second to the far corner prior to Murray half-volleying just wide, the visitors could so easily have levelled approaching the break when firstly; McNamee was denied by the feet of Gary Rogers before Cleary blocked Kieran Sadlier's follow up attempt.

Cleary, paired rather surprisingly with Seán Hoare in central defence, was a rock as The Lilywhites maintained their fourth successive league clean sheet.

Though, the pressure levels being applied by the champions was distinctly limited. Instead, the side they dethroned last year picked up where they left off before the break. That man, Hoban, dragged an effort across goal before the Galwegian played Murray through on goal with McNulty pulling off a fine stop.

However, the most gilt-edged of their second-half chances fell to the aforementioned Benson. The Westmeath man was upended by Steven Beattie as he broke from midfield with referee Paul McLaughlin pointing to the spot. But, just when it seemed as if Dundalk might give themselves some breathing space, McNulty tipped superbly around the upright.

He had another chance after a later break through the centre, which he directed into the side-netting as nervousness built-up around the famous old Carrick Road ground. Though, all of that tetchiness turned to glee upon the full-time whistle.

What a victory, what an atmosphere, what a night!