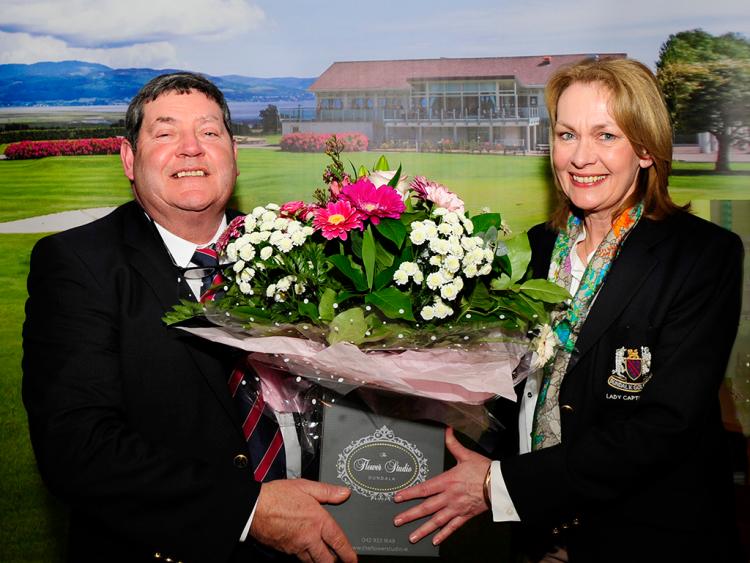 Captain Gerry Byrne presenting a bouquet of flowers to Lady Captain Pat Cleary on the occasion of Captains' Drive In. (Pic: Brian Hopper)

The Captains’ Drive-In took place on Sunday when Captain Gerry Byrne and Lady Captain Pat Cleary teed off to officially mark the start of the golfing season and their terms of office. Watched by a large crowd of members, the two Captains were led to the first tee by piper Marc Keller and promptly hit cracking drives to get the year off to a great start.

The day was marked by three competitions which attracted large entries and saw some excellent golf played in sunshine but with the added challenge of a strong easterly wind blowing across the course.

In the Gents Team Scramble the team of Conor Byrne, Niall Sloane, Dermot McKenna and Bill McCarty came out on top with a net score of 44.1 for the 14 holes while in the Mixed Foursomes Sean and Mary Hession took the honours down the back nine while Pat and Eva Beirne came out on top on the Front Nine. Sean & Mary’s round included an eagle three at the par five 10th.

The Men’s Winter League, sponsored by Tiernan's Centra Blackrock, starts this Sunday, March 4, and will run until Sunday, April 1. It will be a five-man team event with the final being played in a matchplay format. The closing date for entries is this Wednesday, February 28, at 7.30pm with the draw for teams being made that night. Entry is €5 and can be made in the Bar.

Best wishes to Caolan Rafferty who is in Spain this week for the Spanish Amateur Championship at La Manga. Caolan has now moved to 165th in World Amateur Golf Rankings following his excellent results in South Africa earlier this month.