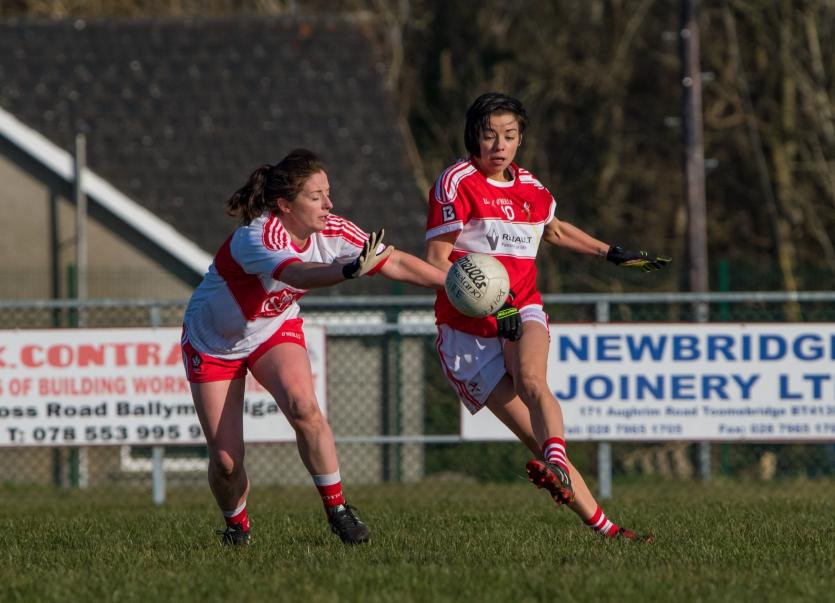 Louth ladies picked up their third league win of the campaign on Sunday afternoon, defeating Derry, 3-13 to 1-9, in Ballymaguigan.

Micheál McKeown's side the dominant force as they recovered from their round three defeat to Fermanagh to overcome last year's All-Ireland junior finalists.

The Wee County wasted little time in establishing their supremacy on proceedings, bursting out of the blocks with two goals in the opening 12-minutes.

They built a 2-4 to single-point advantage after just despite facing into the breeze. Prolific forward Kate Flood got the visitors' first score after four-minutes with a well-taken point after good work by Susan Byrne and Paula Murray. From the resultant kick-out, Lauren Boyle won possession and her fine pass found Flood who smashed to the net from some 14-metres.

Flood and Emma McArdle added points before Derry opened their account when Amy McGuckin pointed after a poor clearance by a Louth defender.

The away team responded immediately, though, with a similar score from Aoife Russell and it got even better for the visitors when Cooley star Boyle beat a couple of defenders and placed a fine low shot past Cheree Mackey in the home goal.

Both sides then missed chances before the Oak Leafers were thrown a lifeline when a McGuckin shot nestled in the Louth net, and that score was quickly followed by a good point from the same player, leaving the scoreboard reading 2-4 to 1-2 after 18-minutes.

Boyle soon restored Louth's six-point cushion, but it was the hosts, under the management of Paul Crozier, whose brother Paddy had a spell working with the Louth senior men's team, who finished the half on top and added points from Ciara Moore (2), Megan Devine and Sineád Comer with Flood and Boyle replying for the Wee County.

However, the Reds upped the ante on the resumption of play with an Emma McArdle point within 30-seconds preceding a goal from the returning Rebecca Carr.

Further points from Sineád Woods, Boyle and Flood extended their lead to 3-11 to 1-6 by the beginning of the fourth-quarter.

There followed a raft of substitutions as both managers gave a run out to some of their fringe players with the intensity levels understandably dropping.

Despite this, Louth remained on top and comfortably saw out the match.

Speaking after the match, Louth manager McKeown expressed satisfaction at his side's display, saying: "We learned a lot from the loss to Fermanagh last time. We defended better, made mistakes and were more clinical in our finishing.

"I was very happy with how we performed against the strong breeze in the first-half and the introduction of Rebecca Carr gave us another dimension. We started both halves very well and that gave us a strong platform. We have Limerick at home on Sunday where victory will see us into the semi-finals," he added.