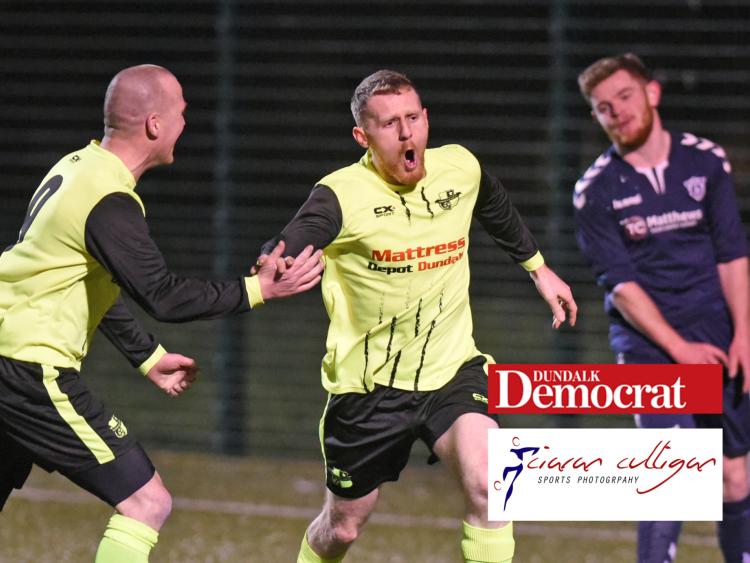 Ardee, whose recent upturn in form has seen them escape the relegation places, put together some neat passages with Conor McManus and Gareth Kane catching the eye. However, in what was perhaps their finest display of the campaign, the Blues were always comfortable thanks largely to their ruthless first-half showing. This despite the match kicking-off seven-minutes late due to an issue with one of the goal frames.

Brendan Hughes put them in front on 25-minutes, nodding past Ardee 'keeper Conor Ryan at the end of a wonderful team move which involved Smith, Tiarnan Mulvenna and Micky O'Kane.

Smith made it 2-0 by smashing a penalty-kick down the middle after the winger had been upended by Ryan when racing onto a loose ball.

The football being played by the home side at this stage was seriously impressive as Mulvenna and McLaughlin went close to extending the gap before Smith turned up his brace two-minutes before the break. He darted past two Ardee tacklers and rifled high to the net from an acute angle, finishing the game as a contest.

But, to their credit, Conor Lynch's side didn't give in as Mikey Nulty replied instantly by opening the Deesiders' account.

This appeared to give the visitors some momentum moving into the  , however, all their hope was dashed when Mulvenna showed good footwork to engineer Muirhevna Mor's fourth, curling left-footed to the corner of the net.

McManus pulled a goal back for Ardee with a well-placed free-kick. Though, the Blues were to have the final say as O'Kane played into the feet of substitute Paudi Hearty who made no mistake for Muirhevna's fifth goal of a very satisfactory night.