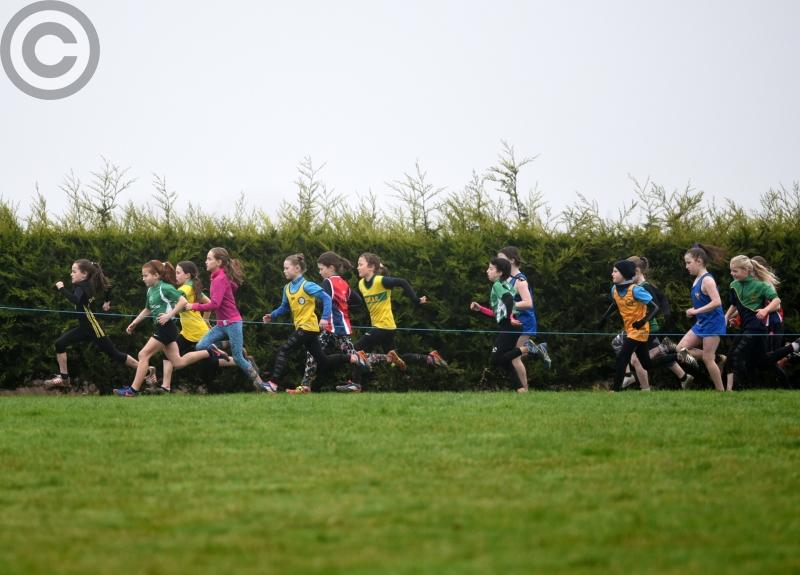 In horse racing parlance, the going was heavy as a cohort of County Louth’s best juvenile cross-country runners gathered to enjoy the 2018 edition of the Blackrock AC cross-country meeting which was held in the grounds of the Geraldines GFC in Haggardstown. After the incessant rain of the previous few days. the course resembled a mini-version of hell and back designed to test the most dedicated athlete, however, despite the mud and the water, every competitor stuck to their task and produced a fine morning’s running, enjoyed by coaches and parents alike.

The action started under the watchful eye of starters John and Mary McGuone with a fast and furious Girls U7 100m in which the host club was represented by Rachel Clarke, Ella Conway, Lainey Jeytoo and Yvie Westwood. All the girls ran brilliantly in a very competitive race, storming home to fill four out of the top six places just behind race winner Kelly Sheridan of Dunleer AC. In the boys race it was Dara Rooney who completed the U7 double for Dunleer when he won his 100m in fine style pushed all the way by the St. Gerard’s AC trio of Caolán McKinnan, Evan Cheshire and Harry O’Callaghan.

Next up was the Girls U9 500m with Maeve Cunniffe, Sarah Mathews, Aisling Finegan and Grace McEvoy flying the flag for the host club. The girls battled hard all the way round and completed the course in excellent time with Maeve earning fine fourth place. Zoe White took gold for Glenmore AC who also collected the team gold. In the Boys U9 500m Blackrock AC’s hopes were high when Cormac Greene, Emmet Kearney, Daniel DeLasa, Sam Jeytoo, Roan Carroll, Óisín Curran and Johnny Gogarty took their place on the starting line. As expected the boys didn’t let the home side down with Cormac producing a winning performance to lead his team to a gold medal. Emmet was a just few metres behind in a fine second place with the other lads packing well to finish in the top ten.

Grace Reilly, Caoimhe Doherty, Megan McEvoy and Erin Braniff did themselves proud in the Girls U11 1000m collecting a team bronze in one of the most exciting races of the day where Jessica White of Glenmore AC held off the challenge of St. Gerard’s Doireann Conlon to collect a hard-earned gold medal and propel her team to gold also. Jack Greene, James Scanlon and Oscar Conway were the Blackrock athletes who started in the Boys U11 1000m. The three lads performed superbly to place well in a big field which was led home by Lorcan Forde Dunne from Boyne AC who doubled his gold medal tally being part of the winning team.

Emmy Jeytoo, Erin Finnegan and Rebecca Baldwin were the club’s representatives in the Girls U13 1500m and as usual all three produced classy performances the highlight of which was Rebecca’s second place finish. Dunleer AC’s All-Ireland champion Erin Leavy was an impressive winner of the event with the girls from Ardee and District AC grouping well to claim team honours.

The boys U13 1500m lived up to expectations and proved to be one of the most competitive and hard-fought races of the day with Shay O’Donnell of Boyne AC doing enough to see off his competitors. The Blackrock team of Seán Reilly, Ethan Doherty, Senan McCarthy and Keelan Carroll and ran brilliantly to pick up a team bronze. Having two athletes finish in the top three laid the foundation for Boyne AC to secure team honours.

Boyne AC were dominant in the Girls U15 2000m with their two representatives, Caer Ní Gibhne and Anna Faulkner finishing first and second respectively with the girls from Glenmore AC doing enough to pip Ardee and District AC for the team gold. Jack O’Donnell from Trim AC finished ahead of the Boyne AC duo of Danny Nugent and Neil Culhane to win the boys equivalent.

Glenmore AC’s Zofia Mullen had enough in hand to hold off the challenge of Abbie Sheridan and Emma Gillespie of Ardee and District AC in a gruelling Girls U17 2500m. Peter Meegan of Dunleer AC triumphed over the same distance in the Boys U17 event with the Blackrock Trio of Donnacha Hughes (2nd), Eoghan Smyth (5th) and Peter McGuinesss (6th) picking up the team gold.

In the under 19 age group Glenmore AC’s Katie Mallon led home her team mate Anna-Maí Mullen in the ladies 2500m and Boyne AC’s Irish Schools International, Ruarcan Ó Gibhne dominated his race winning in fine style from Blackrock AC’s Oisín Hughes and Boyne AC’s Tadhg Everett who pocketed silver and bronze respectively. The Fit for Life race provided great entertainment and culminated with the ladies of Boyne AC topping the podium to cap a successful day for the Drogheda Club and the men of Blackrock AC, Paul Scanlon, David Broe and Eamon O'Muircheartaigh doing likewise for the hosts.