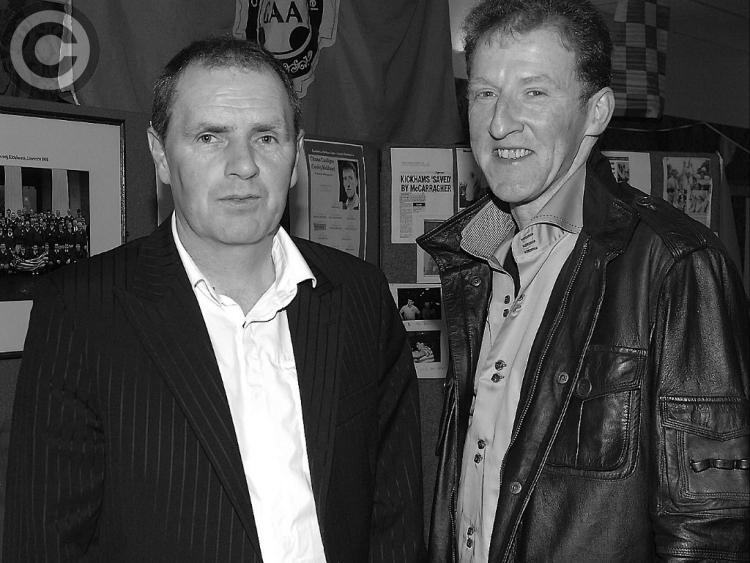 Both Cooley Kickhams and Clan na Gael could put forward strong arguments to title themselves as the aristocratic heavyweights of football in the northern part of County Louth.

Kickhams were five-times crowned winners of Joe Ward in the seventies during a decade spell of almost pure dominance before Clan na Gael took something of that mantle into the mid-eighties and 90s. The Ecco Road charges delivered five titles themselves in just 12-years, the last of which came against Lannléire in 1998.

But they also lost three in four-years around the time Ulster counties began to lay regular claim to Sam Maguire. They were beaten in ’88, ‘90 and ’91 before winning two-in-a-row in the two-years to follow. Their defeat in the 1990 final came against the James Gregory-managed Cooley, a victory which completed a two-in-a-row for the Green and Gold.

Little did they consider at the time that that team, boasting Leo McGuigan, Tony McCarragher and the likes, would be the most recent Kickhams select to get a grip of Louth club football’s most prestigious prize.

Of all their nine titles, 1990 was reckoned to be ‘the sweetest of them all’ for Cooley as they undoubtedly proved all ‘the pundits wrong’ with an 0-11 to nine win over Mickey Heeney’s Clans.

The Democrat printed the following on the final.

“Cooley Kickhams’ Senior Championship tally now stands at nine. In that nine dwells many famous victories… the 1935 defeat of Wolfe Tones, which gave the peninsula its first ever title… the eclipse of St. Mary’s in 1971, which ended a drought lasting thirty-two-years… and the 1977 win over Newtown Blues, confirming beyond all doubt that the seventies really did belong to the wearers of the Green and Gold. They’re readily recalled.

“Where stands Sunday’s dramatic two-point win over Clan na Gael at splendid St. Brigid’s Park? In our book it must rate as the sweetest of them all, a victory that will be cherished for many years to come.

“Ravaged by injuries and other things, counted out by most pundits, Kickhams, it seemed, were going to Dowdallshill to make up numbers only. Clan na Gael had all their aces, and if any of the first fifteen weren’t performing, there’d be others equally as good to come in.

“But, you can put Cooley players in the sick-bay and you can give them suspensions, but you can’t break a spirit that’s shone like never before over the past couple of years. We’ve seen better Cooley teams beaten in the first round of the championship, but never have we seen one with such heart, commitment and will to win.

“It was those three ingredients mixed together that got them the Joe Ward Cup on Sunday. Clans had the height, the strength, and quite possibly the more skilful players, but when faced with adversity, the men from Castletown cried help. That’s not how it was for Cooley, however.

“The sides were level five times and at no time was there more than two-points between them. A great tussle? Not ‘great’ but it was always interesting, chiefly because of the teams’ proximity to each other throughout the hour.

“Cooley led just once in the opening-half, but at the interval were only one-point in arrears. They took over leadership by kicking three-points in the space of seven-minutes in the third quarter. Some people were on their way to the exit before the finish, but they chose not to leave the grounds.

“The game looked like petering out after Cooley had gone two-points clear with seven-minutes remaining, but it had still one more twist to take – two twists if you count the scrimmage in the Kickhams goals with time almost up. There were those who claimed Cathal O’Hanlon’s shot had crossed the line before Pearse McCarragher got his hands to the ball, not among them, however, was the man in the beret, umpire Joey Kavanagh.

“The net danced after O’Hanlon took his shot, but this was probably caused by someone grabbing a hold of it. Joey was satisfied the ball hadn’t crossed the line, and, by having the presence of mind to cover for his goalie, McCarragher took on the status of hero.

“To be fair to them, Clans didn’t protest after the match. Indeed, a supporter who had badgered Kavanagh took time out to shake big Gerry Farrell’s hand. Sportsmanship lives – and long may it be like that.

“Leo McGuigan was better at free-taking than his counterpart, David Staunton; with the game just three-minutes maturing, the forty-yards man tapped over after Brendan Keenan had been fouled. Ronan Greene set Cathal O’Hanlon up for the equaliser”. This before Leo Connolly put the Clans ahead.

“The second quarter was more productive score-wise. It had eight scores, compared with three, and by claiming an equal share of these, Clans held on to their one-point lead. Michael Heeney gathered his charges in the middle of the field with the score standing at 0-6 to 0-5. His side’s six scores had been claimed by just two players – Cathal O’Hanlon and Connolly.

“James Gregory left well enough alone for the second-half, but Heeney brought David Staunton to the middle in a switch with Gerry Curran, while Ronan Greene was moved to the right wing, the plan being to curb Colm McCarragher, who had been quite superb in the opening-half.”

On the resumption, Greene put the Clans two clear before Pat Ferguson and Gary Thornton – from a sideline kick - levelled the match at 0-7 apiece.

Goal chances were spurned by Kickhams as they built-up ahead of steam, however, minors from Gary McGuinness and McGuigan put them two-points clear. Cathal O’Hanlon divided the margin for the Clans, but them disaster struck.

“Seamus O’Hanlon didn’t see beyond the 16th minute. Retaliating, perhaps for something that had been said, the no. 9 was told to leave the field, thus reducing Clans’ chances of a recovery.”

The match passed with Cooley continuing to hold the lead; a two-point lead by the time the aforementioned goalmouth scramble materialised. “You’ll find fellows who stood behind the road goals who swear the ball crossed the line from Cathal O’Hanlon’s shot. The point is, no-one was better placed than the umpires, and their verdict was that the ball was stopped in time by Pearse McCarragher.”