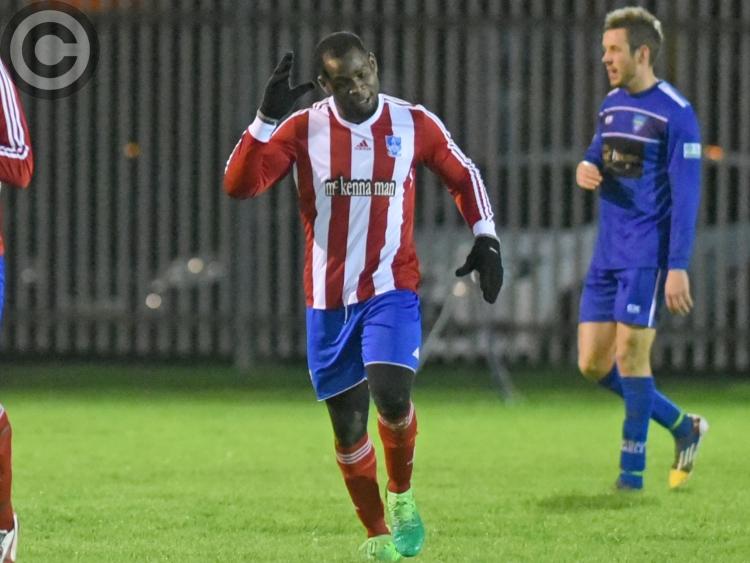 Wherever Bay FC go, goals are almost a guarantee and this trend continued at the Muirhevnamor Astro on Friday night where Damien Bellew's side came out on the right side of an eight-goal thriller with Lourdes Celtic.

Along with the eight goals, five of which came from Bay to move then on to 24 league strikes for the season, there were four red cards and three spot-kicks on a night of absolute drama.

Leading 2-0 at half-time, much of the action unfolded in the second-half where Lourdes were reduced to eight-men and Quadri 'Q' Oluwu followed up his winner at Glenmuir last week by firing home a hat-trick.

Alfonso Crespo headed home a lovely cross from Nikola Jurkovic to open the scoring in Bay's favour before Ryan Dillon almost doubled the lead. However, the Dundalk side were grateful to their 'keeper - Kevin Mullen - for two fine saves prior to them scoring their second shortly before half-time. A whipped corner from Paddy Connor found Johnny Winters and the defender showed no hesitation in making it 2-0.

Frustrated, Lourdes lost a man to a red-card for a poor challenge and from the resultant free-kick, Ciarán Boland delivered a pinpoint free-kick for Oluwu to head home.

The goal, and the sending-off, appeared to inspire Lourdes to life and they cut the deficit to 4-2 before Bay attacker Dillon was shown a red-card for an innocuous challenge. And they reduced Bay's lead to the minimum subsequently when the referee awarded them a spot-kick.

Yet again, however, Oluwu provided spark for Bay in attack and he made it 5-3 when bursting into the 18-yard box and slotting home to complete his second hat-trick in three games.

Another penalty award to Lourdes resulted in them driving it over after the original, successful effort was chalked off for encroachment into the area. Their night was to get no better as two further dismissals and a second missed penalty - which saw Mullen produce a save - allowing Bay to collect all three-points from a barmy game.