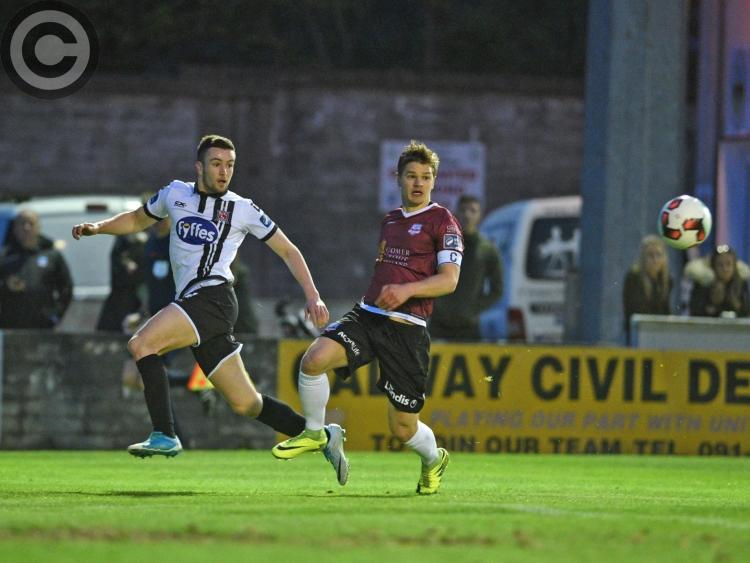 Having battled back from two goals behind to draw level, the Tribesmen were hit by a sucker punch in added-time when Michael Duffy dispatched the winner by Conor Winn - a goal which completely deflated the home crowd who had backed their team in search of a winning goal.

Ultimately, though, Duffy's goal wasn't the decisive blow for Galway who, courtesy of other results on the night, were never out of the drop zone as their three-season stay in the top-flight came to an end.

Centre-half Stephen Folan blasted them in front from eight-yards early on, however, The Lilywhites took control as three fine first-half efforts installed them with a two-goal half-time buffer.

Galway poured forward in the second-half in desperate need of some inspiration and Rory Hale was the provider eight-minutes after the break, cutting Dundalk's lead to the minimum. And their hopes of avoiding defeat improved yet further when Ronan Murray scored their third of the night.

But, in their attempts to forge a winner, Duffy rubber-stamped their relegation on the breakaway, finishing Thomas Stewart's right-wing cross to the bottom corner. You could have heard a pin drop around the Western venue following the goal. On the night, Galway deserved a share of the spoils at the very least.

Folan's opener arrived on nine-minutes and, on the basis of their early dominance, it was a well-merited cushion. Niall Maher's shot from the edge of the area was blocked, with the rebound falling to the defender who flashed it high to the net.

Though Dundalk levelled within two-minutes when Duffy's free-kick was converted to the net by Niclas Vemmelund at the second attempt.

David McMillan, McEleney and Jamie McGrath had opportunities as the visitors firmly wrestled control, and their territorial advantage reaped scoreboard dividends when the latter controlled a Dane Massey delivery beautifully, settling the ball with his right before firing low, across goal and to the net with his left.

The lead was doubled with the last kick of the first-half when McEleney lodged another goal of the season contender. Robbie Benson nipped in and with options steaming forward on both sides, he picked out the Foylesider who in turn dinked over Conor Winn and to the net. It was a sublime move with a wonderful finish.

Undeterred, the hosts were welcomed passionately back into the fray for the second-half by the large home following and they responded as Hale broke through the heart of the Dundalk defence before driving past the sprawling Rogers.

And following a half-hour of trying, they eventually found an equaliser with Murray flashed to the net. It wasn't to be, however, with Duffy's goal leaving Deacy Park in both despair and silence.