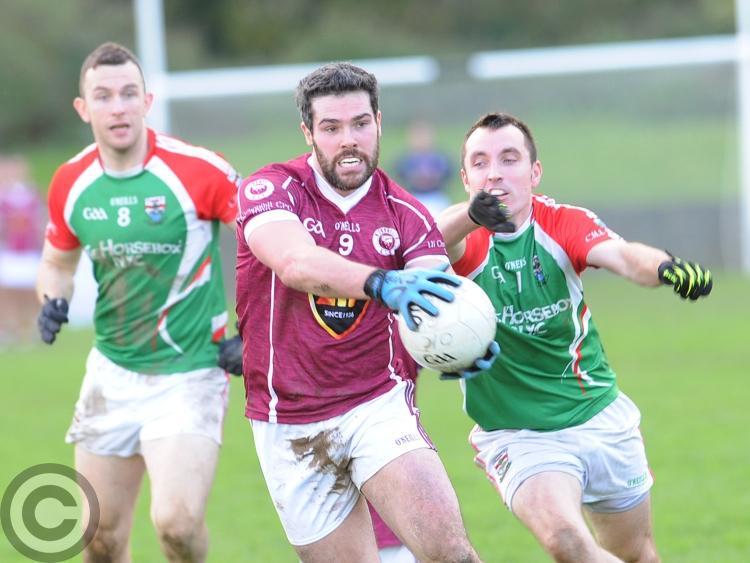 O'Connells' Seán Cairns has the beating of Darragh Foley and Seán Foley of Kilbride in today's match at the Grove. (Pic: Arthur Kinahan)

O'Connell's GFC club chairman David Neasy has compared the events of this afternoon's Leinster Intermediate Club Championship match between the 'Belllingham men and Carlow's Kilbride to the 2010 Leinster final between Louth and Meath.

Ten players were dismissed in the match with the result of the match now clouded in uncertainty.

And, speaking to the Dundalk Democrat this evening, Neasy said: "As far as we're concerned, we won the game and we'll be facing the Meath champions in the next round.

"It was far from a dirty game, but the referee just lost control. There seems to be a problem now with people busting themselves to get onto Leinster Councils to get refereeing.

"After the match, as chairman of the O'Connell's, I was concerned for the safety of the referee and approached him to try and get him safely back to the dressing room.

"But the whole game was 'Sluddenesque'. The referee completely lost control," he added.

However, Neasy was insistent that there was no animosity between the teams involved. He believes the conduct of the players post-match illustrated the true 'spirit of the GAA'.

"Despite what people might perceive from the outside, I think the true spirit of the GAA shone through and I wish I had gotten a photo of it.

"We made contact with Kilbride during the week so that we could get an idea of the numbers coming so that we could cater for them. We had arranged hot food for the players and refreshments upstairs for the supporters.

"But none of the players came upstairs. Both teams got together in one of the dressing rooms and ate together, sharing some banter. There was all of 30 men in the dressing room eating and I think that in itself showed the true spirit of our game," said Neasy.