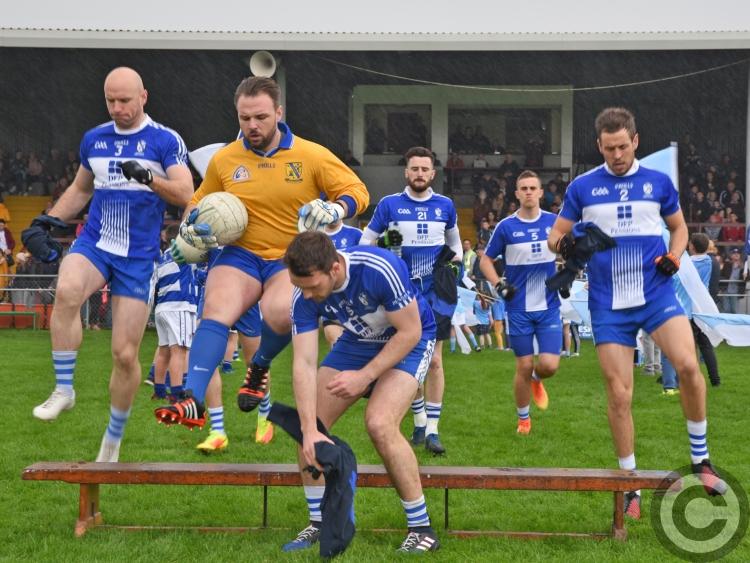 Gaels players clear a hurdle, but not the big one, at Sunday's Anchor Tours Senior Championship final in Drogheda. (Pic: Ciarán Culligan)

Everyone was barking the analogy. You didn't leave the traps, they said – but it wasn't exactly like that. 'You', in case you didn't know, is the Dundalk Gaels, the club with which your writer has been a card-carrier for a number of years well north of fifty.

The county final, played on a sodden Gaelic Grounds in Drogheda, which a couple of speakers on the podium where happy to describe as 'the home of Louth GAA', was the scene of our first county final in 25 years.

Newtown Blues, attempting to win the title for the 21st time, were in opposition. We went into the game with a rich mixture of hope and confidence, looking to bring the honours to The Ramparts for the fourth time in our 89-year history and the first since 1952. Three of the five survivors of the 1952 team were there.

We had had a number of more than useful performances in the preliminaries, and with management having no injuries to grapple with, the biggest backing the club has had in years - many supporters were carried in double deckers - travelled in a buoyant mood.

It wasn't that we didn't leave the traps, or even make a bad break.

Continuing in the language you hear at the track, what we did was veer a little to the right and then to the left on hitting the ground; by the time we reached the first bend there was a deficit to make up.

The gap got wider as the game trundled on.

Our confidence, which flourished in previous matches after we'd gone ahead early on, eroded as Blues, having done their homework, were good at countering the type of football we have branded in recent times.

It – our style of play – may not be pretty to look at, but it was very effective in getting us to the county final and the Cardinal O'Donnell semi-final.

The scoreboard, reading 2-10 to 0-5 at the finish, might have exaggerated Blues' superiority, but it didn't tell a lie. Changing script ever so slightly in the final quarter, we created a few decent chances but didn't take them. At the other end, Blues availed of every one of theirs, giving them one of their biggest-margin wins of their twenty-one.

I was waiting for it as we gathered for some grub later in the evening, and wasn't disappointed. “You have to lose one before you win one,” several said.