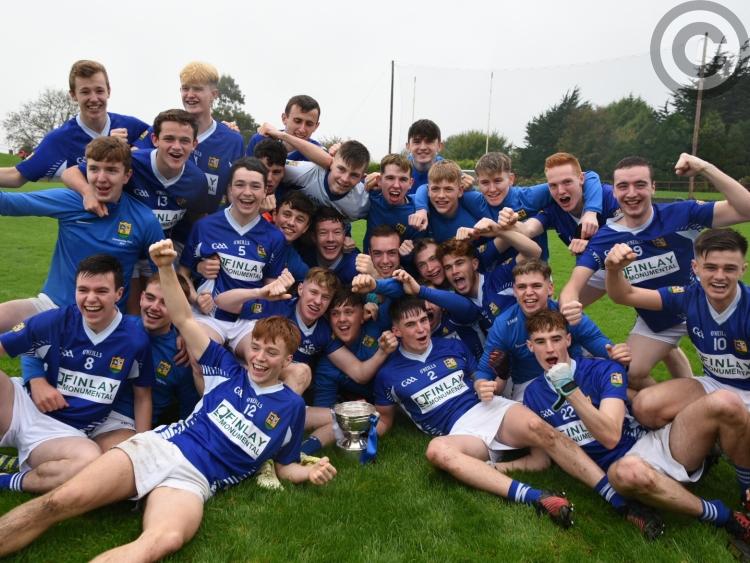 Ardee, St. Mary’s claimed the Fr. Larry Murray Cup for the first time on Sunday afternoon with a rampageous victory over the Geraldines in Minor Football Championship final at the Gaelic Grounds.

Perhaps the most action-packed decider at this grade in recent times, Ardee always look the safe bet for victory, prior to compounding the Haggardstown side’s misery with three-goals in the closing five-minutes.

Considering the ‘invincibility’ tag that was bestowed upon them in the build-up, it was hardly surprising that Tommy Kirk’s men prevailed, and with Man of the Match Jonathon Commins in remarkable form – scoring 2-13 – they made their superiority count.

The wing-forward's performance typified that of the Deesiders’ in general. Composed in possession and clinical in front of goal, they gave the Gers – chasing their fourth title in 11 years – little chance of remaining in touch.

Feidhelm Joyce did his utmost in attack for the Haggardstown side, though, scoring bursts in either half ensured the winners pulled away, enforcing a rout with their late rush towards the posts.

Their first scoring burst arrived in the opening four-minutes as they reeled off 1-2 before the Gers got off the mark courtesy of a scrambled goal from David Murdock. Commins raised Ardee’s green flag at the end of a flowing move involving Shane Matthews.

Murdock’s major provided the Gers with a boost and having found their feet they eased into a 1-4 to 1-2 advantage with points from Conor Soraghan, Joyce (2) and Ben Mooney (free).

It proved to be a false dawn, though, as the winners powered clear, striking 2-7 before the break with Commins and Conor Gillespie crashing goals past the Gers’ helpless custodian, Ciarán Peelo.

Commins closed the opening-half with 2-4 as St. Mary’s went to the break nine-points in front, a gap they extended to eleven with the opening two-points of the second-half.

But, credit the Gers, they fought back and when Joyce found the net either side of minors from Jack Reid and Flynn Kieran the gap was back to a manageable five with momentum behind them.

Typical of Ardee, though, they found an extra gear when required as Commins fired over seven-points on the trot before the 50th minute and when wing-back Gavin Kirk scored his team’s fourth goal, they were well in the ascendency and double scores ahead; 4-19 to 2-9.

Substitute Tristan Knowles and Commins extended their lead before Ciarán Keenan drove to the net with Joyce scoring a ’45 for the Gers in between – bringing their seventeen-minute wait for a point to an end.

Another replacement, Tiernan Corrigan, added Ardee’s sixth goal and they could have scored a seventh only for Peelo to pull off a fine penalty save from Andrew Bingham with the final play.

On this evidence, you will go a long way before finding a better display, or team for that matter, than this Ardee select.