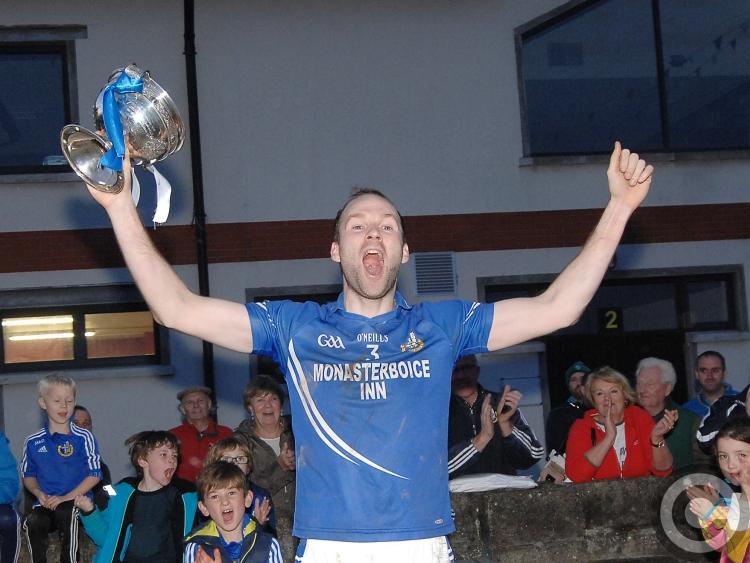 Naomh Máirtín claimed the Cardinal O’Donnell Cup for the first time with a thrilling victory over the holders, Dreadnots, in Castlebellingham on Saturday evening.

Having led by six-points approaching the final quarter, it looked as if the Jocks were going to secure victory at their leisure. The Dreadnots – apart from Páraic Smith who kicked 1-7 of the Clogherhead men’s total – looked in disarray at that juncture.

But a dramatic comeback which saw Smith level the match at the death forced extra-time. However, by rising to the occasion in overtime, Jim Farrell’s team were heroic. JP Rooney and Brian Berrill – who was sublime at centre-forward - led the way as the Monasterboice men deservedly claimed their maiden senior honour at the end of a rollercoaster year.

In many ways, it would have been a travesty had the Dreadnots stolen victory.

The finish was thrilling as emotion got the better of the teams. Without exception, every player threw themselves on the firing line as the play was frantically exchanged. Though, there was nobody more willing than Jocks centre-half Conor Healy who provided leadership at crucial stages in coming forward to score two-points in extra-time, bringing his overall tally to three.

Smith was of course exceptional for the Dreadnots. He almost single-handedly kept them in the contest before converting a penalty in the second-half to begin their revival. But him apart, the Clogher side were well off the pace, especially going forward. Pat Lynch was their only other starting forward to get on the scoresheet, with the likes of Peter Kirwan and Liam Shevlin failing to fire.

Their attacking play was particularly disappointing in the first-half and on the rare occasions that they did find space, they were guilty of shooting some very poor wides. They shot eight over the course of the 80 minutes, mind, the Jocks hit 17, many of which came during a barren 20-minute spell in the second-half where the Dreadnots hit 1-4 to a single-point reply.

However, in extra-time, Naomh Máirtín were evidently the hungrier. They were a point in front at its midway stage and as the Dreadnots' discipline waned – with Barry Faulkner receiving a red-card for striking – the Jocks pushed clear to secure the most famous triumph in their history.

Stephen Campbell and Rooney struck braces apiece in the opening-half as the winners went to the interval nursing a 0-6 to three-points lead. It was an advantage which ought to have been more though, with Sam Mulroy’s missed penalty attempt having consequences later in the match

The Jocks maintained their dominance into the second-half, hitting four of the opening six-points. However, with the men in blue unable to find a score from Rooney’s fourth of the match on 41 minutes to his fifth a minute into stoppage time, the Dreadnots capitalised with Smith winning and converting a penalty before he levelled with the final strike of the match to force extra-time.

Having tried every trick in the book to see the game out, with black cards for Campbell and Conor Whelan, the Jocks trudged off to the dressing room to prepare for extra-time, while the Dreadnots sprinted.

Though, it was Farrell’s side who found their groove during the overtime with Rooney and the re-introduced Mulroy pointing before Healy (2), Pádraig McDonagh, Berrill and Wayne Campbell found range to rubberstamp their victory.

And, fittingly, in his victory speech, captain Michael Fanning called to mind Shane Whelan and Brendan Reilly – two men who would have taken much pleasure from this victory.