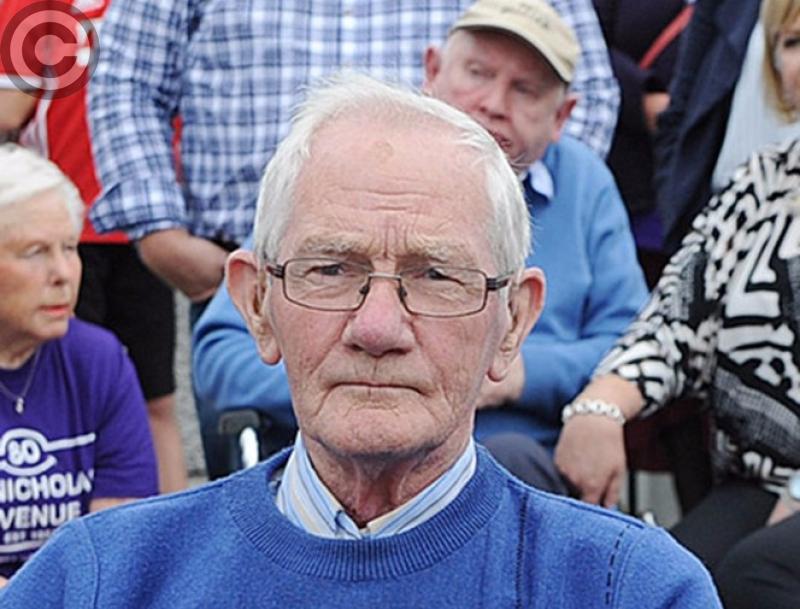 The Godfather of Clan na Gael. Willie Dixon is the club’s oldest member and perhaps their most ardent supporter.

No matter the venue, the opposition, the weather or the competition, rest assured Dixon and his clan of comrades will be surveying the action from the line.

“I don’t even miss training. Myself, Johnny Duffy, Donnach Rice and Albert McGrath, Donnach is our driver,” he added.He once played in goals for the Clans, but, “I wasn’t good enough to play senior,” he laughed.

Nonetheless, himself and his family are rotted firmly in the club’s fabric, its history.

“My father, John, was a founding member of the Clans and the first President of the club. He won championship medals with Dundalk Rangers, but being from the Castletown area, when he retired he helped to form the Clans,” Dixon explained.

“I’m involved with the club all my life,” added Dixon.

“Originally, we started at Alice Kirk’s on the Castletown Road, facing Londus down in Lawrence’s Place.

“We had a long hut and a shed with two snooker tables and a pot-bellied stove in it. We eventually built dressing rooms at the Scouts’ Hall. All voluntary labour.

“We came back into football in 1945 after six or seven years out. I was only a young fella, but I remember we had no gear and we bought boots, gear, stockings and towels so that the players could dry themselves.

“They were very difficult times and with no football being played, everyone just played snooker in the Clans but the De la Salle brothers were a tonne of strength to the club.

The manner with which Willie spoke about the Clans’ history, you could feel his passion and love for the club. Indeed, last year’s centenary celebration is his proudest moment involved.

Though, the many championship victories were also special. And another in 2017 would be a dream come true, he admits.

“When we celebrated our 100 years. There were very many senior victories too which were great, but to see the club celebrating 100 years was very special. We won the junior championship in ’54 and remained senior until 2006,” he added.

“We started the year shocking well. We were doing better than we expected in the league but when the championship started, we seemed to get stuck and we were beaten by the Brides. We beat Na Piarsaigh who we always seem to be able to beat.

“We have been beaten in three Intermediate Championship finals, but I see something different in the team this year. They really want to win it because there’s a couple of them on the verge of the retirement, but hopefully we win and they stay.

“It would be a dream come true to see us competing for the Joe Ward Cup again,” Dixon said.