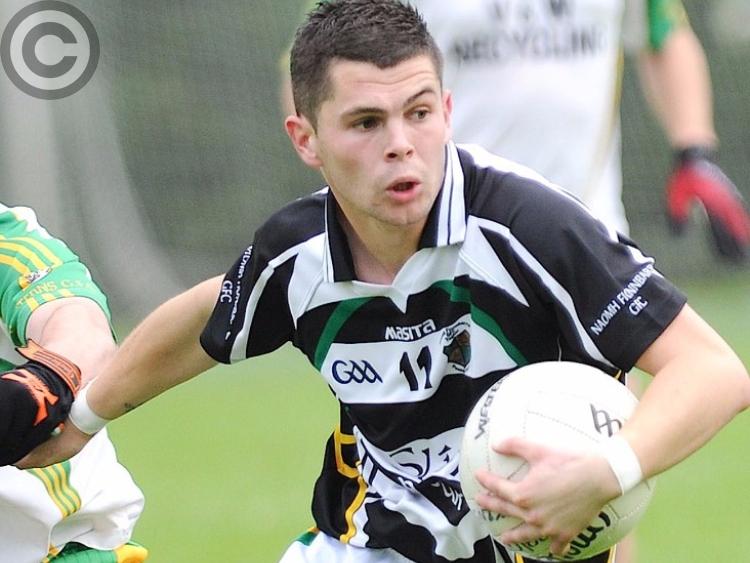 Stuart Osbourne won the second of his championship medals with Naomh Fionnbarra in 2015. He played on the wing as the Togher men, under the stewardship of O’Connells’ Wayne Kierans, demolished Roche Emmets in Dunleer.

It added to the medal he claimed at the same grade – Junior Championship – in 2010. He claimed both alongside his brother Bernard. Not only was he and his sibling winning medals on behalf of the Osbourne clan, they also represented his mother’s family, the Devlins, with both families deeply embedded in the fabric of the ‘Barrs.

But little did Stuart know that his first championship match, back as an Intermediate player, would be in the colours of the O’Connell’s and against the ‘Barrs.

Best friends with the main men in the O’Connell’s – Niall Conlon and Jackie Agnew – and living in Castlebellingham since he was 16, Osbourne made the move across the divide following a year (2016) which saw him completely sidelined with a knee ligament injury – sustained while playing a Sheelan Cup game for the ‘Barrs against the Blues.

“When the championship draw came out, my mother rang me straight away. I wasn’t listening the draw and she said ‘it happened’. I said ‘what are you talking about’.

“She told me what happened and then my brother rang me so it was ‘fun’ at that stage. We played them a couple weeks later in the league and I think that did me the world of good because it got all the nerves and the old feelings out of the way so when it came to the first championship game, it wasn’t as tough as it would have been.

“And even when we won, it felt funny. Ok, I knew we’d won and were through to a championship final, but then I saw my brother and all the lads I played with as a child at the other side of the field.

“So, it was mixed emotions from that point of view, but now it’s absolutely brilliant because I didn’t play gaelic last year through injury so to get back this year and to be playing a championship final is incredible.

"And not only that, but to do it with Jackie Agnew and Niall Conlon who I grew up with and went to school with… They’d be two of my closest mates and to be playing and walking out onto the pitch in a championship final with them is absolutely brilliant,” he added.

Having put in for a transfer years back, for mainly the same personal reasons, Osbourne was surprised to have gotten the move. He’s grateful for the Ballygassan club’s decision to permit his move.

Though, while they gave their blessing to move, coming up against them still entails its fair share of negative commentary from the sidelines, even if Osbourne dismisses it as little more than harmless banter.

“There were a few things said and even during the game, you hear wee snippets from the line of people telling you to ‘go home’, but that’s part and parcel of it with the clubs being so close,” Osbourne said.

“Had I joined a club at the other end of the county, I mightn’t have got as much abuse, but I hear it on a regular occurrence.

“I bump into a lot of Togher lads on a daily occurrence and you hear it, even in the build-up to the game I was hearing ‘you’ll be sorry you left’, but there’s no malice in it.

“Both my Mam and Dad’s families’ are big Togher families. You have the Osbournes who have played with the ‘Barrs for how long and then the Devlins on the other side of it, who are also big Togher men.

“But all my Mam wants to see is the two of us (himself and Bernard) happy and she goes to more football games than most of us in the country to tell you the truth.

“She’s a football fanatic and at the weekend she actually wore a half-Togher half-O’Connell’s jersey. She couldn’t decide who to cheer for so she stayed quiet for the whole game and once the two of us came out of the game without injury and still talking to each other, she was happy.”

However, while he had plenty of familiar faces to lean on, getting used to the new set-up wasn’t plain sailing for Stuart.

Understandably, things felt different at first. However, now that he’s accustomed to the Grove as opposed to John Markey Park, would an Intermediate Championship with the O’Connell’s top his honours with the ‘Barrs?

“To tell you the truth, when I first joined the O’Connell’s, it wasn’t the same and it’s not as if I couldn’t call Castlebellingham home because I know everyone there since I was 16, but your home club is your home club.

“When they (Naomh Fionnbarra) have been playing this year I’ve been cheering them on, even if when I’ve come up against them, all I wanted to do was beat them.

“It’s a very tough question to answer, but with the circumstances I went through last year with the injury, this one would be a wee bit better and it would also be at a higher grade, an Intermediate Championship medal.

“People need to understand, I was out of football for nine-months, I wasn’t able to run for six-months so, even though it was strange at first, the fresh start was good for me.

“It also gave me the chance to be me, everybody in Togher knew me and knew where I played, but I got a fresh start with the O’Connell’s and they kind of asked me where I would suit the club best to play.

“I think I got a fresh start at it and had I wanted to play in goals, I’d say they’d have given me a shot at it the way it worked out.

“There is a great championship buzz around the place. The whole village is being decorated at the moment, that makes the move and the comeback all worthwhile.