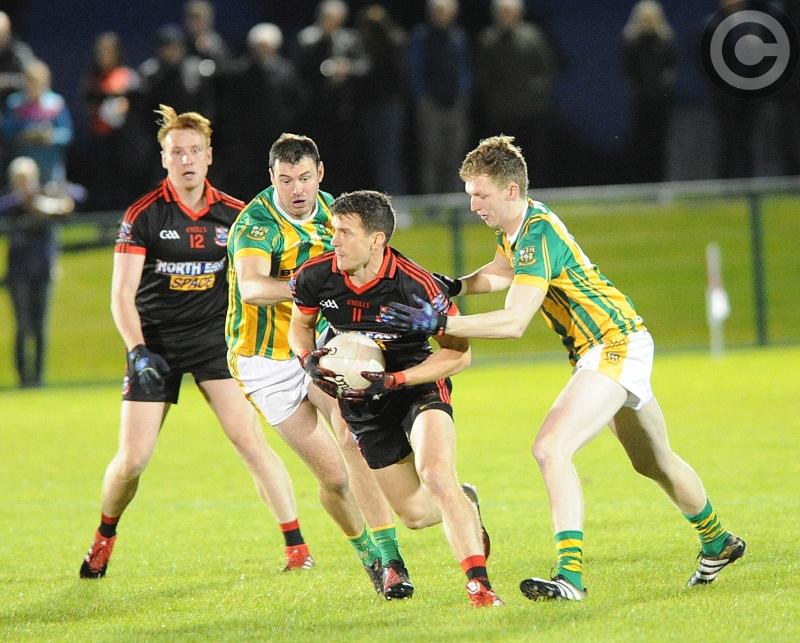 Clan na Gael delved deep into their layers and layers of character to overcome Mattock Rangers and reach the 2017 Intermediate Championship final in Darver tonight.

The Ecco Road men have been eternally knocking on the door at this grade and they will once again get the chance to claim the Seamus Flood Cup against the O’Connell’s in two-weeks’ time, courtesy of their one-point victory over the Collon outfit.

However, their supporters might not have thought a final was on the cards with six-minutes played. Mattock blitzed into a seven-point lead before retiring to the break with a three-point cushion.

But, by showing real composure, the Clans reeled in the deficit and, through their nous earned from years of heartbreak, they prevailed by the slightest margin.

At the hub of this composure was Billy Smith. He oozed class all evening under the lights with his link-up play and ice-cool free-taking crucial to the Clans’ turnaround.

Mark McCann’s side actually opened the game with a goal in their first attack - one that wouldn’t have looked out of place in Oriel Park. Paul Gore, breaking through the Mattock cover, neatly put the ball away along the ground.

The goal had a negative effect on the Dundalk men, though, as it actually sparked John Kennedy’s side into action. They struck a frenzied 2-4 to no-reply in a breath-taking passage of football. Aaron O’Brien and Hugh Donnelly bagged the majors after fine running moves.

The signs looked ominous for the Clans, but deep they dug. Mark Newell stopped the rot and Smith notched his first free of the night to cut the gap.

Both sides were constructed to play on the counter and Conall McKeever revelled in the pattern of this type of game. Failing to kill the ball when a possible goal was on for Mattock, the Clans went coast-to-coast and with a trademark driving run from McKeever, he buried to the net - three in it at the break and momentum with the Clans.

The second-half was a game of cat and mouse as both teams were made to hold their nerve on the imaginary line of engagement. Smith gave the Dundalk side the start they desired with two quickfire points, while O’Brien kept the scoreboard ticking over for Mattock.

Smith nudged them closer with a free before Gore tied the match with an inspirational score from well outside the scoring zone as indiscipline became the theme of the Collon side’s downfall.

The willing Smith added another free to give the Clans a doggedly earned lead before Reid restored parity with a free of his own.

The pressure mounted on every possession as the Clans engineered a free towards the close. Smith, of course, kicked it to install the Clans with a crucial single-point lead. Mattock, to their credit, worked a similar dead-ball opportunity for themselves at the other end, but cruelly their talisman, Reid, missed as the Clans hung on like each layer of their strength in character has taught them to.

A final meeting with O’Connell’s, a rematch of 2012, awaits.