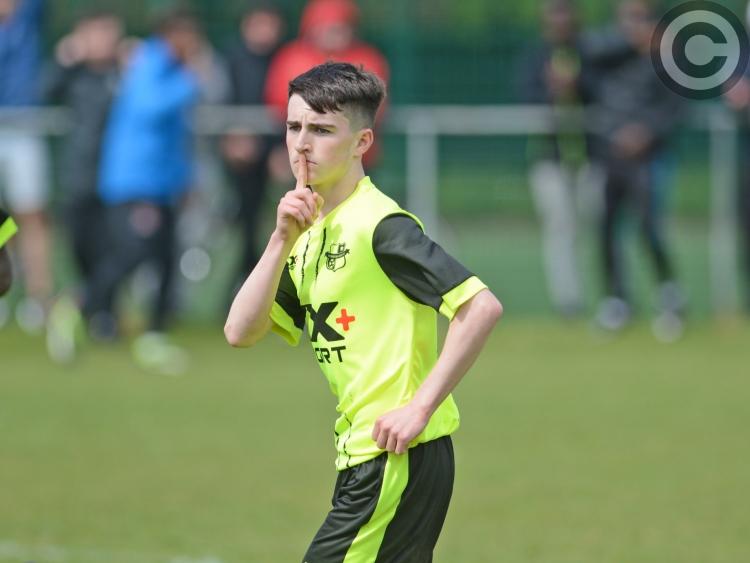 A double first-half strike by Moyo Badun saw Muirhevnamor claim all three-points on Friday night over Woodview under floodlights at the Dundalk Sports Centre.

The pacey Muirhevnamor striker fired past Lee Molloy after only two-minutes and his attacking partner Patrick Nicholson almost doubled their advantage shortly after when his pile-driver was tipped away at full stretch by Molloy in the Woodview goal.

The visitors struggled to settle, but a clever free kick from Sean Flanagan in the 10th minute found the feet of Sean McGeeney who timed his run to perfection and he slotted past Precious Kent to level the game at 1-1.

Woodview almost took the lead soon after when Conor Smith burst through the Muirhevnamor defence, but he dragged his short wide of the post.

The hosts came storming back into the game with Sean Hill testing Molloy on two occasions and they soon regained the read when Moyo Badun out-jumped the entire Woodview defence to head home Oisin Morrow’s inviting corner-kick.

Muirhevnamor went 3-1 in front on 26 minutes when William Opoku jinked his way into the Woodview penalty area before firing low to the net from 12 yards.

A lapse in the Muirhevnamor defence allowed Sean McGeeney an opportunity to score on the half hour mark, but he took one touch too many allowing Precious Kent time to make the block.

And the home side should have stretched their lead before the break when Badun went clean through, but he fired wide and then Sean Hill was denied by a flying save from Molloy.

The hosts had the majority of possession in the second-half, though they just couldn’t add to their goal tally and were denied on several occasions by sub ‘keeper Tiernan Bromley who produced several good saves to frustrate Badun, Nicholson and Isaac Olajide.

Woodview made several changes in the second-half and they began to get more involved in the game and Matthew Reynolds showed quick feet down the left-wing as he created a chance for himself, but Kent was in the right place to smother the low shot.

At the other end, Olajide’s driving effort from the edge of the penalty area struck the outside of the Woodview post in the dying minutes as 'Mor settled for a two-goal win.