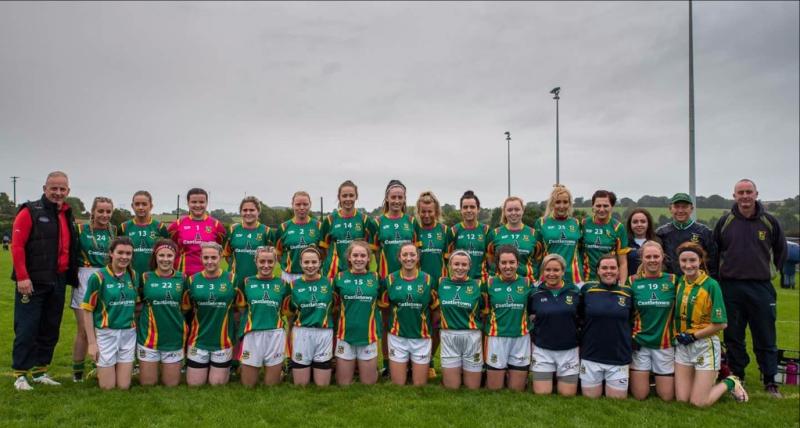 The victorious Clan na Gael Ladies team with their management.

Ciara Woods finished as the game's top-scorer with an excellent personal tally of 3-3, while there were two goals apiece for Alanna McLoughlin (Clan na Gael) and Emily Hyland (O'Ragh's/Plunketts).

The Clans got off the the perfect start with McLoughlin and Woods both finding the net to force them 2-4 to no-score clear approaching the end of the first-quarter.

Evie Martin hit back with a goal for the Drogheda-side, at one point reducing the gap to six-points, but the Ecco Road girls found a second gust towards the end of the opening-half and they added 2-5 to a single-point before half-time with the goals coming from McLoughlin and Grace Smith.

Hyland found the net for the combination early in the second-half, though Woods and centre-half Sinead Woods replied with further majors for the Clans, who led 6-10 to 2-2 with 40 minutes on the clock.

And the goalscoring wasn't to finish there with both teams scoring braces apiece. Hyland's second and a three-pointer from Hanna Martin for the south-Louth outfit came either side of Chloe Enright and Woods - her hat-trick score - doing likewise for the Clans.

After the match, a delighted Clans captain Sinead McGuill received the cup from County Board chairman Dermot Woods, while Kellie Hughes was named Player of the Match.