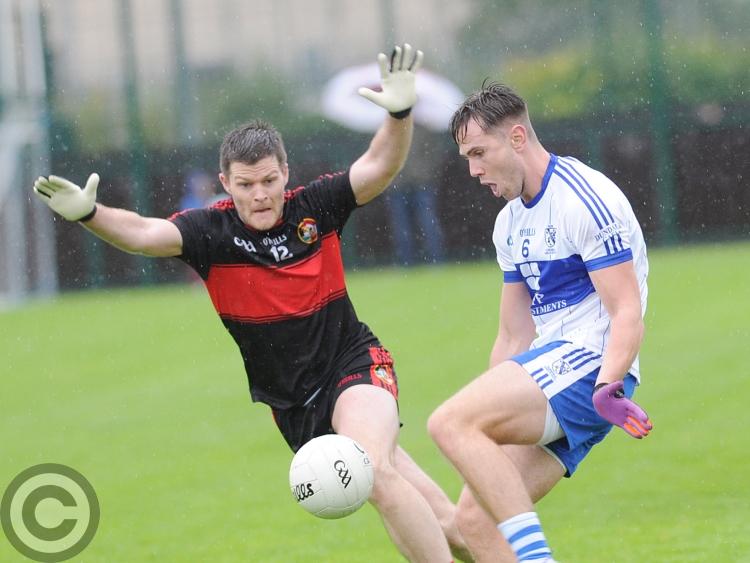 Dundalk Gaels' James Stewart gets the ball away despite the attentions of Pat Lynch of the Dreadnots. (Pic: Arthur Kinahan)

It was the big name players who proved the difference between the Gaels and the Dreadnots as Louth man Páraic Smith accounted for 1-5 of the Clogherhead men's total in their 2-10 to 0-6 win at the Ramparts on Saturday afternoon.

The visitors' ability to create and convert goal-scoring chances handed them the ascendancy at crucial times during a scrappy affair as the Gaels were left to rue missed opportunities both from play and placed-balls.

On a damp and greasy day in Dundalk, both outfits struggled to get into the game and come to terms with the conditions with mistakes littered throughout the opening-half. Though, it was the visitors who coped best and they found themselves up three-points to one after 15 minutes thanks to scores from Anthony Lynch and two from Smith with Éanna McArdle scoring for the Gaels.

The Dreadnots missed an early goal chance after some good work along the sideline from Dermot Campbell and Pat Lynch, with Jamie Faulkner bringing off a goal-line clearance, putting it out for a ’45 which was subsequently missed by Califf.

The Dreadnots were well on top in the opening-half and were four-points to one up after 25 minutes, but a McArdle free and a point from Derek Crilly left just the minimum between the sides before a Califf ’45 left the half-time scoreline reading 0-5 to 0-3 in favour of the ‘Nots.

The Clogherhead men gathered steam at the start of the second-half with a goal and a point from Smith sandwiching a minor from Gaels’ midfielder David Moloney, putting six between them after five-minutes of the second-half.

There seemed to be a glimmer of hope after Derek Shevlin and James Califf were both given black cards for the visitors, but Barry Faulkner and Jerome O’Brien proved capable replacements, while Moloney’s point in the 31st minute proved to be the Ramparts side's last score from play.

McArdle and Gerard McSorley pointed a free each in the last few minutes, but by this stage the game was over as a contest with Richard Kirwan scoring 1-1 in sealing the game for the Dreadnots.

The holders, Dreadnots, can now look forward to a Cardinal O’Donnell final with Naomh Máirtín, while the Gaels face a hotly anticipated rematch with the Jocks in the championship next weekend.