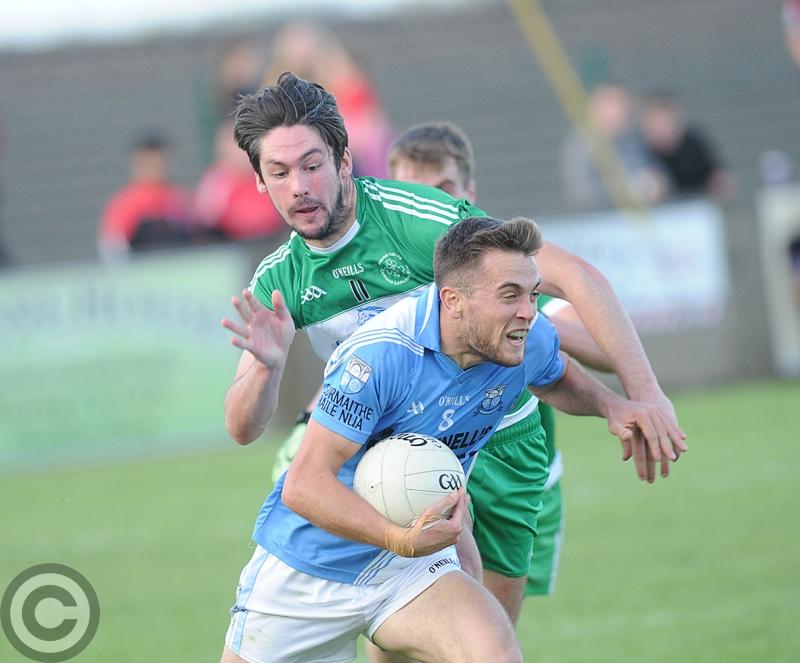 Newtown Blues were more than deserving one-point winners over St. Patrick’s in a heated affair in Dunleer on Saturday night.

While they were far from clinical, it would have been unjust had the Lordship men taken their place in the semi-final at the Blues’ expense.

And with 20 minutes to play, this was a distinct possibility with Paddy Keenan’s point, this third of the game, putting Davy Nelson’s men into a three-point lead.

That was to be their last score, however, as the Blues finished with four unanswered points, the last of which, a distant effort from wing-forward Robert Carr, came after a flurry of wides.

It was one of seven miscued efforts by the Drogheda men in the second-half and it could have cost them dearly had St. Pats not been so sluggish in their attacks.

The ease at which the Blues turned the seven-time Joe Ward winners over was in stark contrast to the intelligent and measured approach to which the county’s most successful club took to minding the ball.

This proved crucial in the closing moments as the Blues defended Carr’s point for well over 10 minutes with the ball in hand, this despite Andy McDonnell having received his marching orders on a second yellow-card for a reckless challenge of Darragh Lafferty.

While they were far from their best and appeared limited on the scoring front, having taken 27 minutes to score from play, the Blues look the likeliest winners of championship at present.

They controlled this game, even after Danny O’Connor gave St. Pats the lead for the first time with a drilled effort to the net past the quarter-hour mark. That entry came against the run of play with much of the opening having been concentrated at the opposite end of the field.

Though, Ronan Phillips’ men hit straight back as John Kermode’s meandering run from the left-flank resulted in him driving the ball to the net off the underside of the crossbar. Nally’s fourth and final point of the half was sandwiched between two efforts from the Lordship outfit, via Keenan (free) and Evan White, as the side’s retired to the interval deadlocked, 1-5 apiece.

The opening score of the second-half served as another setback for the Blues when neat interchange between the O’Connors, Danny and Eoin, resulted in the latter scoring a second Pats major and when Keenan followed it up with their only minor of the half, they led by three after Andy McDonnell had narrowed the gap.

Points from Colm Judge, Hugh McGinn – who had a telling impact off the bench – and an inspirational effort from McDonnell tied the game up before Carr landed the decisive point after 53 minutes.

Thereafter, seeing the match out was all but a formality for the Blues as St. Pats ran out of attacking ideas.