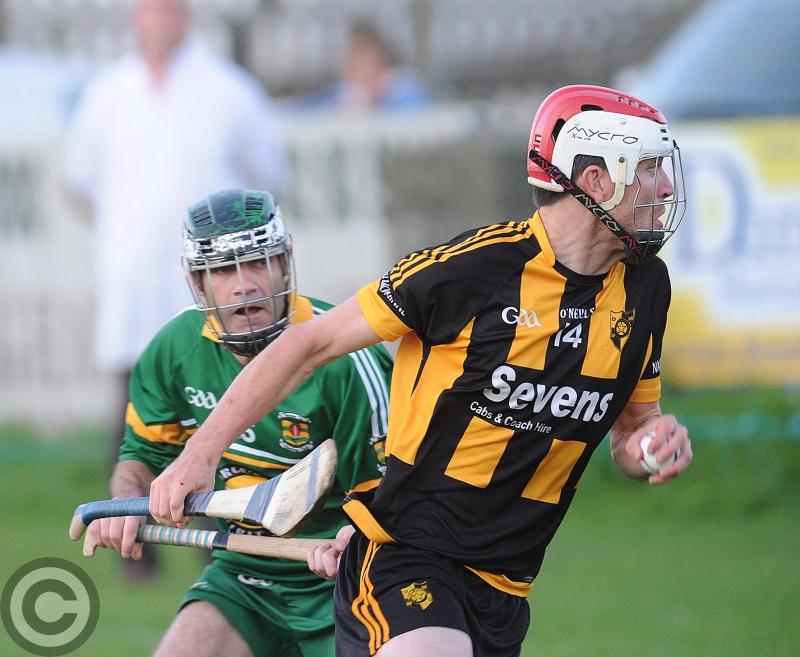 The most competitive 10-point game of the year.

With the hour played and the game a draw, 0-14 apiece, the loss of talisman Shane Callan proved to be the turning point for Pearse Óg who watched their challenge falter with three goal concessions in the nine added minutes.

David Yore was Moninne’s hero, scoring a brace of majors in consecutive attacks, before substitute Donal Connolly completed the rout on 65 minutes.

Moninne’s wastefulness, which tallied to 16 wides, coupled with the bravery shown by Ógs contributed to an excellent contest at Dowdallshill, which neither deserved to lose.

Callan epitomised his team’s bravery, picking himself up after a long injury stoppage to strike the point of the game from 80 metres, tying the game up for the eighth time with 51 minutes played.

Brian Brady’s Black and Amber were unable to rediscover the form which saw them trounce holders St. Fechin’s seven-days earlier. While, Pearse Óg, last winners of the Paddy Kelly Cup in 2013, led three times in the final 10 minutes, though on each occasion Ronan Geoghegan frees hauled Moninne back on level terms. The wing-forward was nerveless and ended the contest with 0-9.

It appeared that neither were brave enough to force the issue, and claim the spoils, before a mistake provided the crucial score. A mishit free from Diarmuid Murphy dropped short and Yore drove the breaking ball past Barry Myles to nudge Moninne three-points in front; the largest gap of the game.

The next attack yielded the forward’s second three-pointer when he cut in from the left-wing to drive a rasping effort to the top right-hand corner of the net. Without Callan, despite Gerard Smyth and Andrew McCrave producing big performances, Ógs’ were unable to muster a reply with Connolly’s goal, which cannoned in off the post, adding a comprehensive gloss to the scoreboard.

Having trailed 0-7 to six at the break, Ógs had goal chances of their own in the second-half, both of which fell to the lively Dean Walsh. His first go at goal drew a terrific save from Moninne custodian Paul Delaney before he blazed the second attempt over with the goal at his mercy.

When the group phase is decided and the honours handed out, Ógs could rue those opportunities because this game was there for their winning. They face St. Fechin’s next in a do-or-die contest to see who makes the semi-final, while Moninne play Knockbridge. Automatic qualification to the final is at stake there, mind, Moninne will need to perform better if that prize is to be claimed.