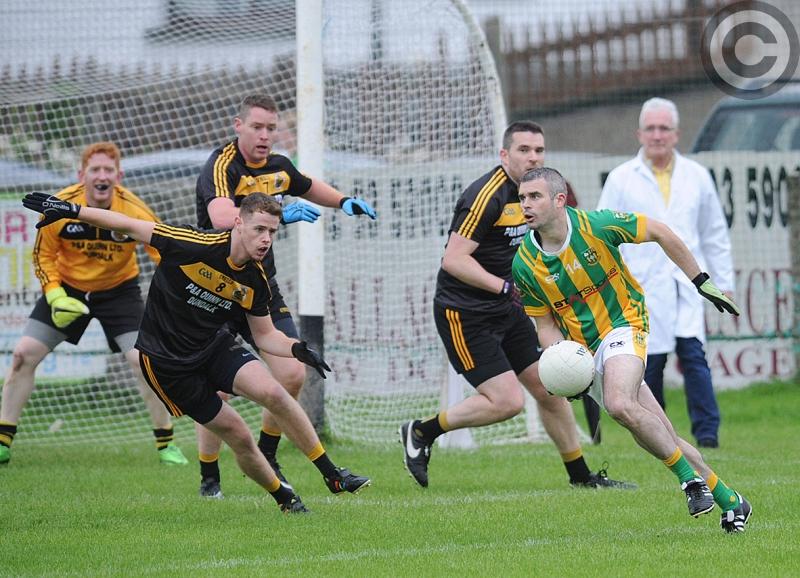 Clan na Gael booked their place in the quarter-finals of the Intermediate Championship with a facile victory over Na Piarsaigh in the first of the Dowdallshill double-header on Saturday night.

JJ Quigley and captain Mark McGeown struck 1-4 apiece as the Clans easily accounted for Billy Smith’s absence in sewing the game up well before half-time.

The Naps scored only once in the first-half, through wing-back Ciarán Murphy, as Mark McCann’s charges dominated in every position.

They raced into a five-points to no-score advantage inside the opening-quarter through McGeown (2), Mark Newell (2) and Paul Gore before Murphy got the Rock Road men on the board with a fine point from the right-wing after 18 minutes.

However, Paul Crewe, McGeown, Robbie Curran (free) and JJ Quigley all struck minors in the lead-up to the interval as the Clans retired to the dressing rooms nursing an eight-point cushion.

They were equally as dominant in the second-half as their lead mounted to 12 through points from Drew Duffy, Quigley (2), Crewe and McGeown before McGeown dispatched their opening goal past Damien McCrink having been found by Stephen Fitzpatrick.

While their victory margin was impressive, the Clans were by no means spectacular as they continued to dismantle their town neighbours. Their performance was more workmanlike than anything, though they dropped their guard somewhat in the closing quarter as Alan McCartney and Mark Larkin (3) closed the gap.

Quigley had the final say in drawing level with McGeown as the game’s top-scorer in the closing moments. The veteran tapped to the empty net after McCrink had prevented Conall McKeever’s prior effort from crossing the line.

One impressive statistic is the fact that all but one of the Clans' scores came from play.