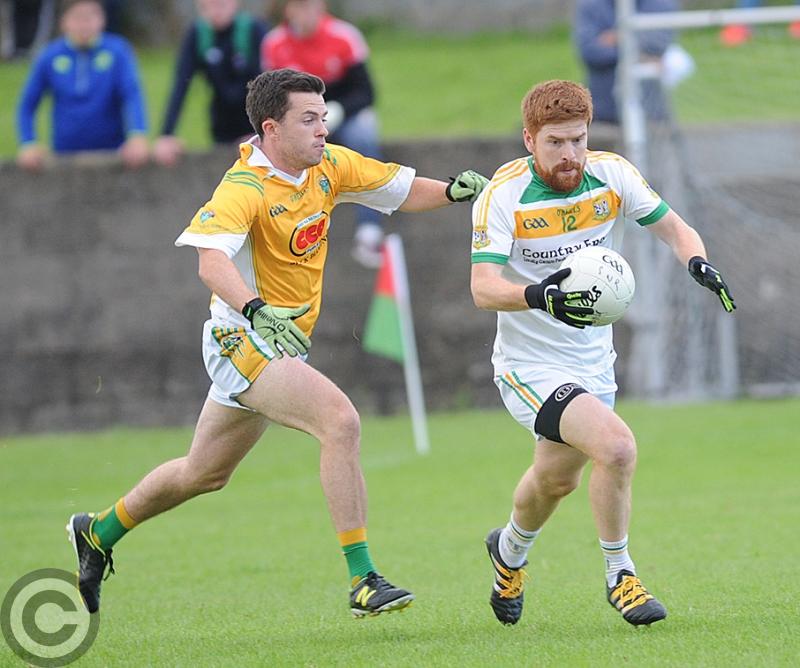 Trying to beat the Sean O’Mahony’s is an unenviable task, even for the most united of outfits. They were far from their best in the absence of talisman Stephen Fisher in Dowdallshill on Saturday night but, as is the case so often, they found a way to win despite St. Joseph’s threatening a shock.

Having performed well below their own high standards for lengthy periods, it just had to be their trademark move which ultimately proved to be the Joes’ undoing. A high ball into the full-forward line from Pat O’Brien saw Conor Crawley on hand to hammer the ball to the top-corner of the net with his firmly clenched fist.

The Intermediate holders, St. Joseph’s, were arguably the better team with Conor Finnegan the O’Mahonys’ only scorer until Crawley’s decisive goal at the beginning of the final-quarter.

Wayne McKeever’s men will feel they left victory behind them with a pair of missed frees from leading marksman Alan Quigley, from close range in the first-half, sticking in mind.

Had they been converted, it may have been a different story. But then again John O’Brien missed a one-on-one goal chance with the last kick of play which would have made the O’Mahony’s victory all the more convincing. It also would have knocked St. Joseph’s out of the championship courtesy of their scoring differential to Ardee, St. Mary’s.

With both having lost to the Point Road men on the same scoreline, 1-7 to 0-9, and in the same agonising manner, the sides will have to play-off to see who moves forward to the quarter-finals.

Fisher and Jonathan Connolly were notable absentees for Alan Craven’s team as it looked difficult to choose a winner beforehand, considering the O’Mahony’s had already progressed to the last eight. Finnegan and Quigley were locked in an early shoot-out, contributing the first nine-points as the O’Mahony’s led 0-5 to 0-4 approaching the end of the first-half.

While Finnegan was unerring in front of the posts, Quigley, either side of shooting a beauty in the 15th minute to give the Joes the lead, was guilty of shooting two close-in frees wide.

Though, Liam Dullaghan’s 19th minute black card was to halt his team’s momentum as they failed to score for the final 10 minutes of the half.

That allowed the Dromiskin outfit to grow in confidence as the opening-half progressed. A point from O’Hanlon tied affairs for a fourth time before a sharp turn from Alan McKenna resulted in him sending the Joes in one-point to the good at the break; 0-6 to 0-5.

Quigley and O’Hanlon tagged on further scores after the restart as the Joes sensed a famous victory was on the cards. But, in typical fashion, the O’Mahony’s hit back when Crawley connected sweetly at the back post for his second goal in two weeks. It was also the Quaysiders first score in 26 minutes.

A sixth point from Finnegan preceded a long-range minor from David Dowling to put the senior kingpins in control, and leading by two-points, before a free from O’Hanlon reduced the gap to the minimum.

The final eight-minutes passed without a score, though there was no shortage of drama. Crawley was sent-off on a second yellow for sparking a schmozzle in front of the Joes’ goal while Seamus Quigley almost conceded a howler after spilling a Joes effort which had dropped short.

With the Joes fearful of conceding another point, which would have knocked them out once and for all, they allowed the O’Mahony’s plenty of possession. Though, their hesitancy was almost punished when O’Brien burst through in the final minute only to see Sansom pull off a spectacular save low to his left.

It's hard to see who can topple the O’Mahony’s at this point.