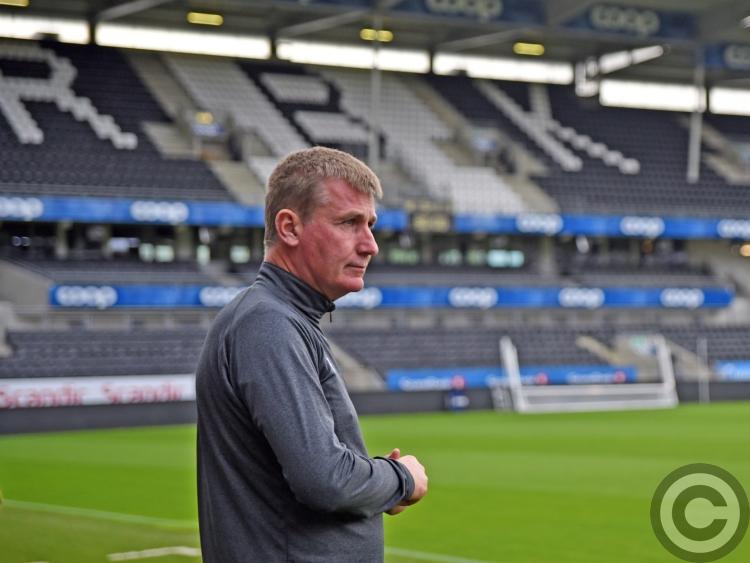 Stephen Kenny has hailed the “determination, fortitude and courage” of his players, despite the Dundalk manager having watched his charges exit European competition in Trondheim last night.

Icelandic international Matthias Vilhjalmsson’s extra-time winner – a goal which put Rosenborg ahead for the first time in the tie – decided a contest which came down to what Kenny described as fine “margins.

“We’re very disappointed to lose but the players were terrific overall,” Kenny said.

“I can’t complement the players enough for their efforts and their willingness to put their bodies on the line.

“It’s tough for us to come to a place like Rosenborg, with 20,000 every week. You see that there’s nothing between the teams yet we’re playing at ‘bloody’ Oriel Park, with very limited facilities.

“The players deserve to be playing on stages like this. I think they showed that last year and they showed it over these two-legs. We have gone out on the margins here and it’s very hard to take.

“The players have shown that they can be consistent and go toe-to-toe with all these top teams That speaks volumes for them.

“Rosenborg are an excellent team with a lot of international experience, but, overall, over the two legs, I feel we were unfortunate to go out.

“Going through wouldn’t have flattered us. We were the better team at Oriel Park last week and should have won the game. Tonight, Rosenborg were overall the better team but to concede, in both legs, right before half-time, it killed us really.

“Last week, Rosenborg were able to defend after scoring and to see out the 1-1 even though we had all the possession, but today it gave them the impetus to go and attack us.

“They were struggling for rhythm before that. It was their first effort on goal and they scored and that allowed them to come out for the second-half flying and the crowd got up for it.

“Psychologically, the game shifted there,” he added.

Kenny lamented the fine margins of the tie. Having taken a moment to reflect back on his team’s several missed chances, he pointed to Rosenborg keeper Anders Hansen from David McMillan – when Dundalk led 1-0 – as being decisive in the tie.

“The first 20 minutes, I thought we passed it very well and David McMillan’s header saw the ‘keeper make an incredible save – I was certain it was in.

“That means they need three if that goes in so I think we’re through if we get that.

“We hung in there in the second-half. They were shooting into their supporters’ end which meant we couldn’t get up the pitch as much but we nearly scored right at the death with Robbie Benson’s free-kick.

“Obviously, they get the goal in extra-time, but then Ciaran Kilduff’s one came off the bar. It would have put us through and it’s hard to take that but those are the margins.

“Over the 180 minutes, there was nothing between the teams. Just, in extra-time, they scored and we hit the bar. It’s ruthless,” said Kenny.