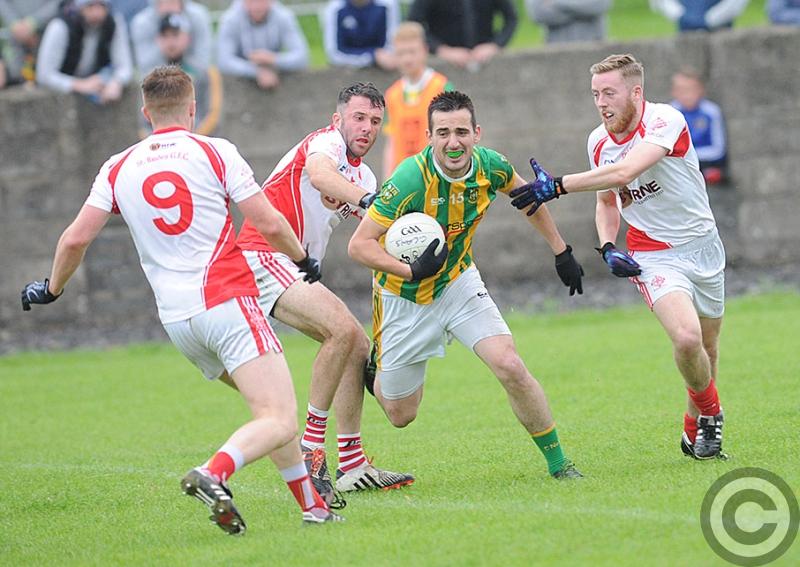 St. Bride’s accounted for a wasteful Clan na Gael in Dowdallshill tonight to book their place in the Intermediate Championship quarter-finals as Group Two winners.

There can be no doubt that David Reilly’s team improved upon last week’s showing against Na Piarsaigh in overcoming the Clans for the second consecutive year, however, had the Ecco Road men been more clinical in front of goal, they would certainly have claimed the spoils.

Cathal McKenna’s 12th minute major proved the difference between the teams as the Knockbridge natives recovered from an early two-point deficit, as well as losing Patrick Reilly to injury, to lead for most of the night.

Though, they were helped in no small part by the lacklustre Clans attack. Having went scoreless from the 14th minute all the way through to a Robbie Curran free a minute into the second-period, Mark McCann’s hit a further 12 shots off target.

Billy Smith was the guilty party in front of goal on two notable occasions late in the game. And, while the second saw him shoot off target when under immense pressure, he really ought to have hit the target and raised a green flag from his prior effort having engineered an opening close to goal.

He drove into the side-netting instead; with the effort summing up the Clans' night on the scoring front.

Curran and captain Mark McGeown opened proceedings with points for the Division One side before St. Bride’s reeled off the next five scores, the fifth of which saw McKenna drive to the bottom corner having collected Laurence Steen’s shot which rebounded off the upright.

Clans free-taker Curran and Smith were to hit points in successive attacks to cut the gap to three, however, they wouldn’t score for the remainder of the half as two frees from McKenna helped the Brides post a five-point cushion at the break; 1-6 to four-points.

Curran got his side’s opening two scores of the second-half, either side of three minors from St. Bride’s; two of which came from the impressive Seán Brennan.

Brennan’s third of the match, on 44 minutes, was to be the last occasion that the Division Two league leaders were to trouble the scoreboard until Michael Keane’s fabulous run and point two-minutes into stoppage time.

Six-points in a row had brought the Clans back to within two in the meantime, but their failure to convert prolifically ultimately cost them victory, leaving their championship fate in the hands of next week’s town derby clash with Na Piarsaigh.