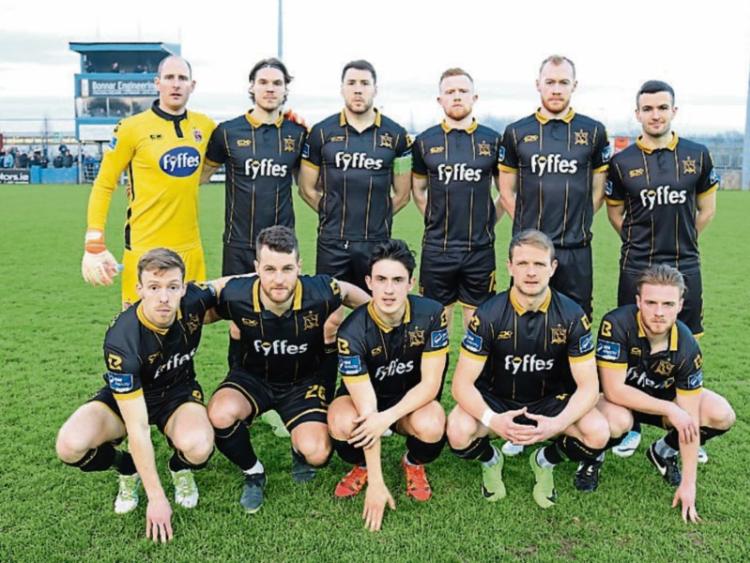 Fresh from captaining Dundalk to the three-points on Friday night, Brian Gartland criticised the state of the Finn Park surface.

“It was one of the worst I played on in the Premier Division,” Gartland told the Dundalk Democrat.

“But, you have to play the conditions. At the back, we just had to defend and not take chances.

“In a game like that if you give away a goal the pressure is on. At 2-0 you can give away one, it can be a sloppy one or a mistake, and you’re under the cosh and the mentality of the game changes so it was great to keep a clean sheet.

“They didn’t really have any chances in the second-half, a couple in the first, and we could have been a little bit better in the final third but it’s not the easiest when the pitch is like that.

“In the end, we’re delighted with the win considering the state of the pitch.”

He continued: “The pitch was dry but it was only half-grass. There were holes, lumps, ridges and divets running the whole way along it. It was just terrible, but you had to adapt because it was the same for both teams.

“It wasn’t a pitch for passing football and we just had to get the win either way,” Gartland added.

“Sean is a good player. As we have said, we have the best all-round squad in our time here and right across the backline there’s such competition. Niclas (Vemmelund) was excellent last week at centre-half and Paddy (Barrett) has also been excellent.

“I’ve had a decent enough start to the season and Seán has come in for his first game and was brilliant. He’s so athletic, he’s quick, he’s got a great leap and is good with the ball. So yes, I was happy with the way the two of us performed.”

There was a contentious moment though where the Irish u21 international appeared to handle when under pressure from Finn Harps forward Eddie Dsane, but Gartland believes his defensive partner was rightly awarded the free-kick.

“I don’t think it was (a penalty). He was trying to shield it out and the man has come through the back of him, he’s nudged him in the back and he fell on top of the ball,” Gartland said.

“It was a free-out and the ref has given it. I think the ref was just thinking the ball was just going to drift out for a goal kick, as it does a lot of the time, but when he’s gone down he fell on top of the ball.

“There were a few niggly challenges. Jamie McGrath got an awful kicking and there was a lot of late challenges on him. I don’t know whether he was targeted or it was just because he keeps the ball so close to his feet that he enticed players in, but there was nothing reckless or over the top either.

“He’s flying, the goals are there and he’s the hit woodwork twice but I’d point out that he had two great headers out of our box and aside from that, Tommy’s (Stewart) chance all came from Davy showing and his great lay off.

“He never gives defenders a minute, even if he can’t win it he’s giving them a hard time. He was absolutely excellent tonight.”

“Everyone thinks we’re looking at Cork but it’s too long a season to be like that. Early on last season they were ahead of us as well but in saying that we’re six-points behind so we can’t afford to be losing games.

“We’re not happy losing games and especially losing two early on to our rivals, but we’ll just take each game as it comes and three-points will be the objective.”