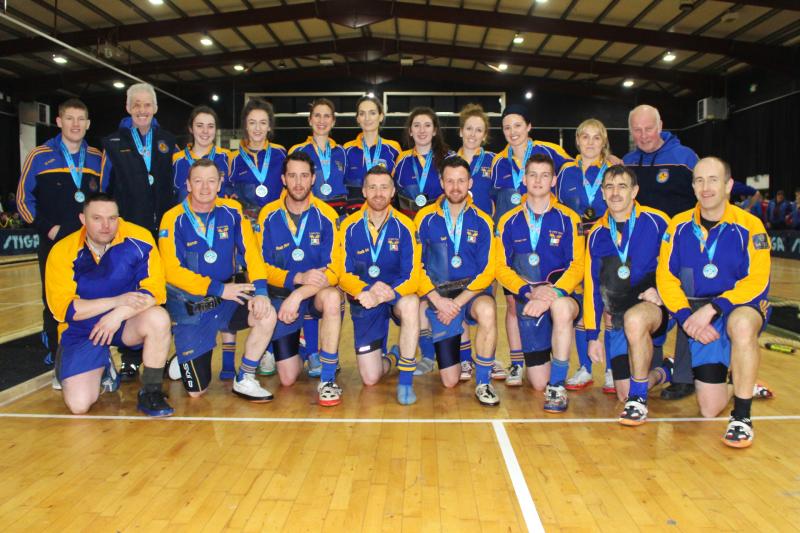 After an extremely successful indoor season where they won a clean sweep of national titles, it was a confident St Pat's squad that made the trip to Breaffy House Arena in Castlebar to compete in the British and Irish Indoor TOW Championships.

These championships are a new entity, having been changed from the UK Championships – in which Ireland obviously did not compete - and are a good addition to the Irish tug-of-war season.

The Men’s 600kg closed competition was first up, with teams from Ireland, Scotland, England and Northern Ireland in action. As ever, the competition was contested in a round-robin section with the top four teams proceeding to the semi-finals.

The St Pat's Ireland ‘A’ team suffered an early setback when Timmy Kelliher sustained a back injury. He was replaced by Alan Byrne, from the Gort- - Club.

The St Pat's Ireland ‘A’ team continued through the competition to book a place against the Ireland ‘B’ team - mostly made up of members from and Mountain View - in the final with Pat’s powering through to take the British & Irish Men’s 600kg title.

The St Pat's Irish ‘A’ women’s team, having won both national titles, went into the championships as favourites but they were dealt a blow in the 500g event when the Ireland ‘B’ team, made up of members of the B&K club, beat them in two straight ends to leave the Pat's women in second place.

The women still had the six-a-side 380kg event to pull in the afternoon and they drove on hard to power the Ireland ‘B’ team across the line in the final take gold and redeem their good name.

The St Pat's Mixed 600kg team then took to the mats in the final of the closed championships. They made their way easily through the round-robin section to book a final place against the Scotland ‘A’ team.

Pat's continued the form they had shown throughout the competition by taking the first end but they lost the second end and were narrowly defeated in the third, leaving them with a silver medal.

The Men’s 640kg competition kicked off proceedings for the day and St Pat's continued the form they had shown when representing Ireland the day before, not dropping an end to take the British & Irish Men’s 640kg title.

It was then over to the St Pat's women to pull for the club in the Women’s 500kg. The final of this competition was a copy of the competition in the closed championships the day before, with the St Pat's women lining out against the B&K women and they dug deep to drive over the line and take the 500kg Open title.

The two titles up for contention in the afternoon were the Women’s Open six-a-side 380kg & the Men’s Open 660kg.

These competitions were run off at the same time, with the mats alternating between the two – first the men out on the rope, then the women. This left one St Pat's very busy. Gary Conway, as both a puller on the Men’s 660kg and the coach of the Women’s 380kg team, had to be on double-duty!

The St Pat's women were hit with an injury during the round-robin section when Rita O’Toole had to sub on for Aoife Mulligan. This was a bad blow, as the substitution meant an 11kg drop in the team’s weight, placing the team at a consideration disadvantage.

In the other competition, the St Pat's men were back out on the mats in the Open 660kg. With the team weighing in at 635kg, they had a steep challenge ahead of them.

The Irish teams dominated this competition again with Mountain View and St Pat's facing off in the final. This proved to be a real test of strength for the St Pat's men, as they were giving away 23kg to the Mountain View team, but they proved to be up for the challenge and took the final and the title in two straight ends.

This successful weekend brought an end to the indoor season for the men. The women, however, must continue their training, as they will be travelling to Poland to represent Ireland in the World Games in July.