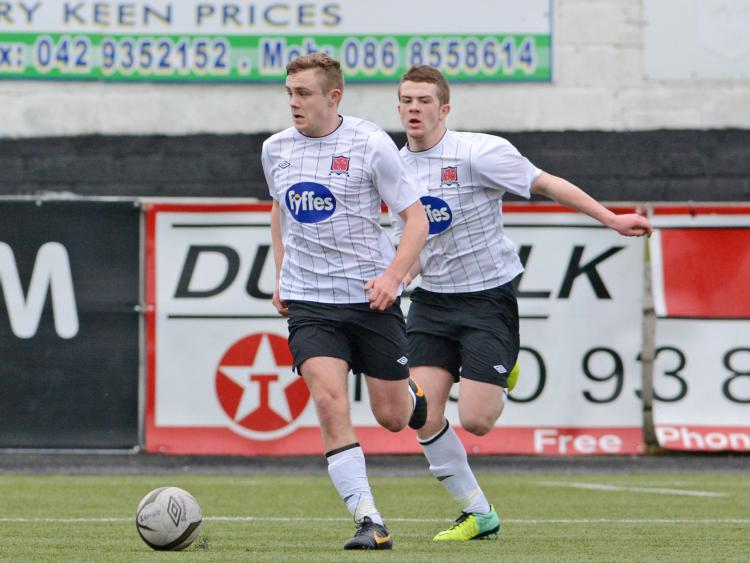 Georgie Poynton and Ciaran O’Connor have both left Dundalk to go on loan at Bohemians and Finn Harps respectively. Picture: Ciaran Culligan

Dundalk manager Stephen Kenny has confirmed that Ciaran O'Connor and Georgie Poynton have been sent out on loan until July.

Local striker O'Connor - who enjoyed successful loan stints at Warrenpoint Town and Derry City over the past two seasons - has signed a new contract with the League of Ireland champions but will join Finn Harps on a six-month deal.

Midfielder Poynton - who has one-year remaining on his contract at Oriel Park -  has made the move to Bohemians and played in their friendly against St Mochtas on Friday evening.

O'Connor was plagued by injuries last year and featured in just eight of Dundalk's 54 games.

He damaged ankle ligaments in a pre-season friendly against Limerick last February which left him on the sidelines for two months.

His first appearance of the campaign came as a substitute against Longford Town in April but despite being on the field for just eight minutes he left The City Calling Stadium with a broken metatarsal.

It was another five months before he featured in the first-team again, starting the FAI Cup quarter-final win over UCD at Belfield. However, he was forced off at the break with a rib injury and Kenny is hoping that a temporary change of scenery will signal an improvement in his fortunes.

“Ciaran could play wide for us and that is an option we have considered but his best position is centre-forward and we already have David McMillan and Ciaran Kilduff who got us 34 goals last season from that one position,” explained the Lilywhites boss.

“He needs to get matches and he'll play every week at Finn Harps. He is going to move up to Ballybofey and try and concentrate on playing games until July so we'll see how that goes.”

Nineteen-year-old Poynton was also limited to 10 appearances with the first-team last year.

Like O'Connor, the midfielder is ineligible for this year's SSE Airtricity U19 League and Kenny feels that sending the native on loan will help his development.

“The next progression for George is to go on loan. He has a good attitude and we will see how he gets on with Bohemians.

“Both players are going on loan until July and we have left their squad numbers vacant,” he added.

“We'll see how they develop between now and then and we will make a decision ahead of the Champions League games.”