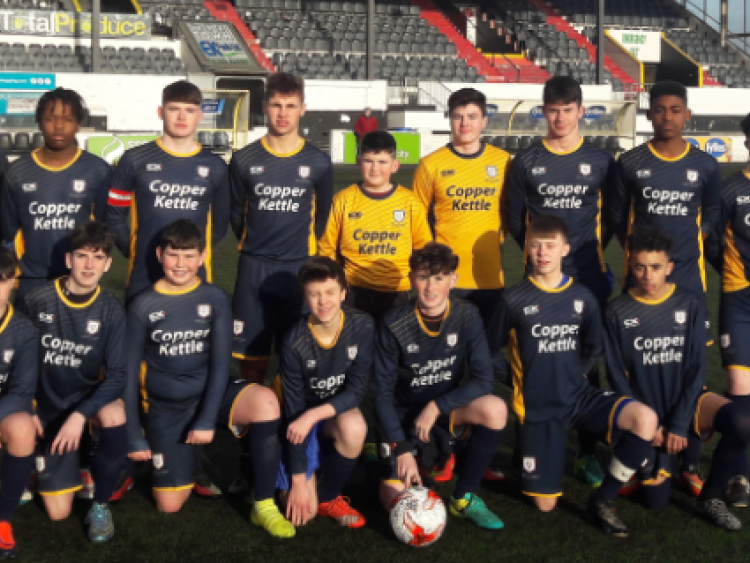 Coláiste Chú Chulainn ran out winners in their tightest game to date against Balbriggan CC in the North Leinster semi-final at Oriel Park.

After a Robbie Duffy winner late in the quarter-final saw them through against Ballymakenny College in Drogheda, this match had the Dundalk team taking on the much-fancied north Dublin outfit.

With a team loaded with players from high-profile clubs from the Dublin Schoolboys League, Coláiste Chú Chulainn under pressure from the outset but a counter-attack goal against the run of play from Caolán McCabe settled early jitters and allowed Cú Chulainn a much-needed confidence boost on the 20-minute mark.

Coláiste Chú Chulainn had to absorb a lot of pressure throughout the match as the Dublin school maintained possession for long periods. However, the Dundalk school were more effective with their possession and were two nil up soon after from only their second shot on target - Ciarán Johnston tapping home from a fine cross.

Some confusion at the back allowed Balbriggan a goal on the stroke of half-time but Coláiste Chú Chulainn started the second-half well and the improvement saw them claim their third goal - thanks to a long-range effort from McCabe which went in after hitting the post twice before.

This goal left the Dundalk side in control but a penalty decision with 10 minutes to play made for a shaky close to the game. However, some resolute defending and solid play from keeper Jack McKenna ensure Coláiste Chú Chulainn would not be denied.