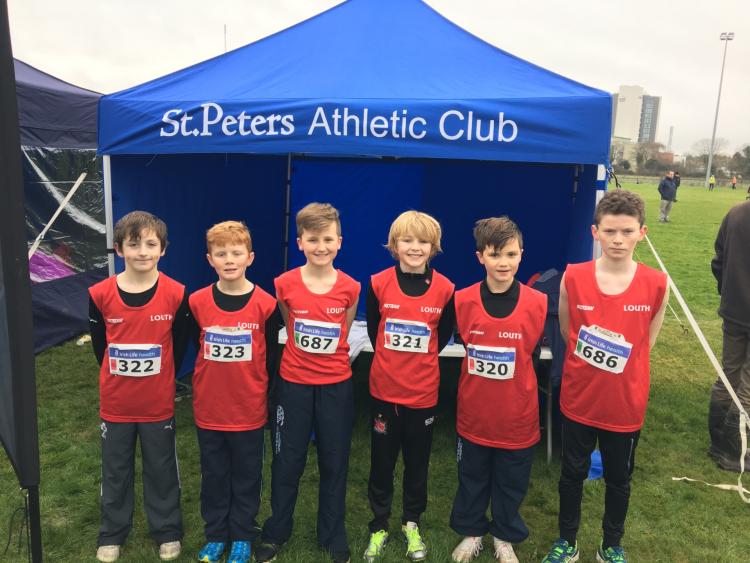 The curtain came down on the cross country season with the National Novice and Juvenile Championships for uneven ages which was hosted by Athletics Louth in DkIT on Sunday.

St Peter’s AC had eight athletes that qualified as part of the Louth U11 and U13 teams but unfortunately two of the athletes were unable to compete due to sickness.

The boys U11 race saw their first involvement and the boys accounted for themselves excellently. Both Jack McLaughlin and Harry O’Reilly didn't look out of place as they mixed with the athletes in the business end of the race.

This was the first time both had run at national level but these ever improving athletes weren't far away from the individual medals as they were part of a large wave of competitors that crossed the line just seconds behind the first 12 who were awarded medals.

Jack crossed the line in 24th with Harry in 27th and both were the first two scorers on the Louth team.

Padraic Tinnelly soon followed his clubmates and both he and Conor Litchfield can be proud of their efforts in reaching the National Championships in the first year competing for the club.

The U13 race didn't go as well as the U11 for the St Peter’s club as both athletes struggled to break out of large groups that they got boxed into.

However, both Sean Allen and Mark Litchfield are strong runners and both will be looking forward to 2017 with renewed optimism as both have being going well in training lately and Sean in particular is showing signs of reproducing his form from last year.

The event itself was a fantastic spectacle with the country’s finest juvenile athletes compete in Dundalk. Huge credit must go to the Athletics Louth County Board for yet again doing the county proud in the fantastic setting of DkIT.