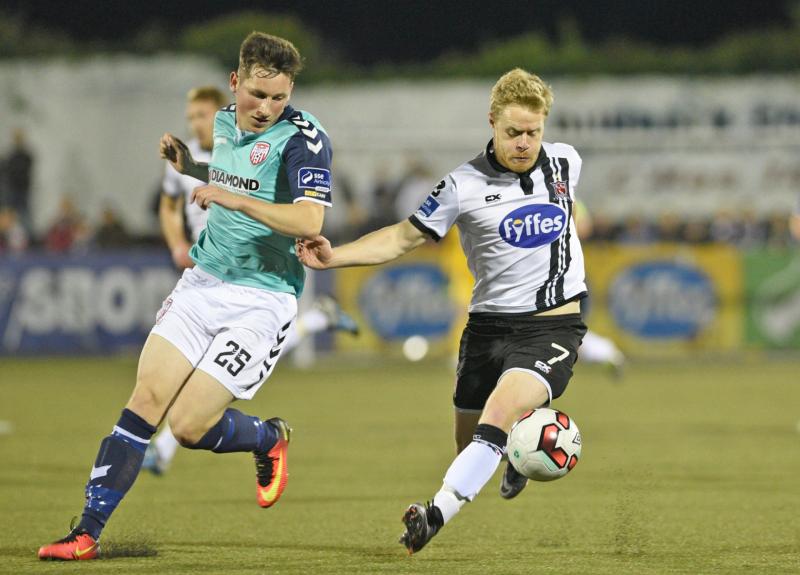 Daryl Horgan was at his mesmerising best as Dundalk moved eight points clear at the top of the SSE Airtricity League table with a rousing 3-1 win over Derry City at Oriel Park on Friday night.

Speaking earlier in the day, Martin O’Neill cited Dundalk’s busy schedule as the reason for leaving Horgan out of his squad for the upcoming World Cup qualifiers against Georgia and Moldova but, on this evidence, the 24-year-old cannot be far from making a breakthrough into the international set-up.

The little winger played a starring role in what could be a significant win for Dundalk the end of the season, setting up two of their goals and tormenting the Candystripes back four throughout.

The result propels Stephen Kenny’s side eight points clear of Cork City and although The Leesiders have two games in hand, the pressure is firmly on John Caulfield’s side to keep pace with the reigning champions.

Kenny made one change to the side that drew 1-1 with Shamrock Rovers just three nights earlier with John Mountney coming in to replace Robbie Benson on the right flank.

Their opponents, who were boosted by the return of Dean Jarvis and Aaron McEneff, arrived looking to extend a 10 game unbeaten league run. Indeed, the last time Kenny Shiels’ side tasted defeat in the Premier Division came back in July when David McMillan bagged a hat trick in the meeting between the sides at The Brandywell.

Speaking in the build-up to the game, the Derry City boss claimed that Dundalk looked tired in their encounter with Rovers but there was nothing lethargic about a frantic and thrilling first-half here.

Dundalk should have taken the lead after just four minutes when Horgan worked space to cross from the left. He found Patrick McEleney at the far post, but the Derry man’s header posed no danger to his former teammate, Ger Doherty.

Realising the significance of the game, the home crowd were edgy throughout and they were stunned into silence two minutes later. Rory Patterson dragged centre-backs Andy Boyle and Brian Gartland out of the middle, allowing Barry McNamee to pick up possession on the edge of the Dundalk penalty area.

McNamee’s drive across goal was only parried away by Gary Rogers and Austrian Lucas Schubert was on hand to take advantage of a slip by Dane Massey and tap the ball into an empty net.

Horgan, yet again, was the architect, leaving Conor McDermott trailing in his wake on the left flank before cutting the ball back for McMillan. The ball evaded the striker but Mountney was in the right spot to control the ball and slam home the equaliser.

The Galwegian was involved in the build-up to the second goal four minutes later, teeing up McMillan for a curler that Doherty did well to turn around the post.

Mountney’s corner from the right was headed against the crossbar by Dane Massey and Gartland was on hand to nod home his second goal in the space of three days and take his tally for the season to five.

Doherty kept the deficit at one going into the half-time interval. McMillan threaded a great ball down the right channel for McEleney who saw his effort from a difficult angle saved by his former teammate.

Horgan had the Oriel Park faithful on the edge of their seats again in the 53rd minute with another electric run down the left but despite jinking past McCormack, his cross fell just behind Mountney and McMillan.

Dundalk then had what looked like a good penalty appeal waved away by referee Paul McLaughlin when centre-back Max looked to have handled a bouncing ball shortly after.

The pressure eventually told on the hour mark. Horgan ran at the unfortunate McDermott before changing direction at to cut in. His reverse pass took Karner out of the game and McMillan was there to smash home his 15th league goal of the season with a crisp left-footed finish.