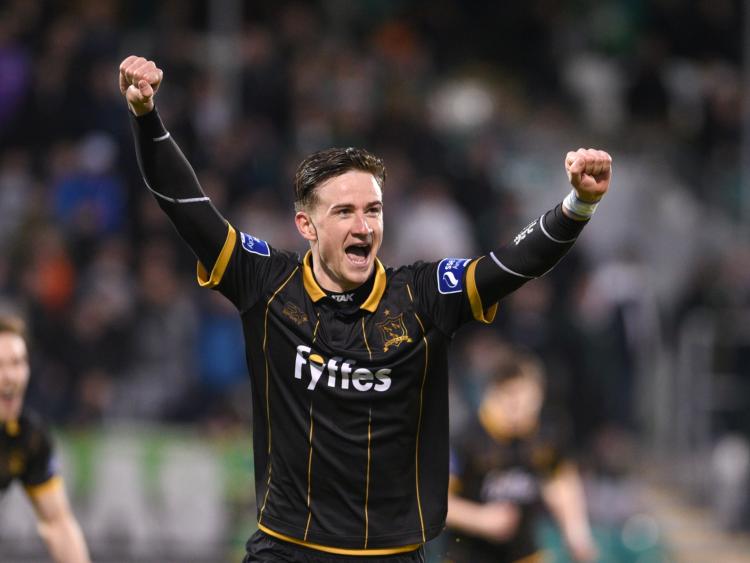 Dundalk make their debut in the Europa League group stages on Thursday night with Ronan Finn insisting that qualification to the knockout stages is well within their capabilities.

The midfielder, who was part of the Shamrock Rovers side that  finished their campaign pointless in 2011, issued the rallying call ahead of Dundalk's opener against AZ Alkmaar in Holland.

And although it may not have been delivered in the same vein as Conor McGregor's 'we're not here to take part, we're here to take over', Finn was still bullish about Dundalk's prospects.

"At Rovers in 2011, it was different because qualifying for the group stages was the highlight and that was the first time the club had done it whereas I genuinely feel that within this group there's a very strong belief that we've an opportunity to get points.

"We’re going into the games preparing to get something from games. In 2011 we were going away to tough venues and we probably weren’t as well equipped as we are here to go and get anything. We finished with zero points but the objective this time is to get points on the board."

Finn summed up the mindset of the Dundalk squad when asked what the reaction would be if they finished up with the same poor haul as the Hoops.

"We'd be devastated," he replied. "You work hard to put yourself in this position and it's brilliant bceause the media and everybody in the country suddenly takes notice.

"Everybody will tune in, people who don't really watch League of Ireland but who watch European football. You are representing Ireland and they will take notice, so you want to put on a good display, you want to be challenging, and you want to be going to Holland looking to get a result."

Speaking last week, Robbie Benson felt that the Europa League, as opposed to the Champions League, was 'a better fit' for Dundalk this season and Finn agreed with that assertion.

"We all watch Champions League football on a Tuesday and a Wednesday and to be there would just be surreal but, with respect to ourselves, we would have been playing against world class opposition, full internationals, World Cup winners.

"I think now we are at a level where we can go and compete. We have already played BATE Borisov and Legia Warsaw and we have shown that we can compete at that level.

"The teams in our group are all respected, they are good sides, but they'd be on a par to what we've played already and we have made a good account of ourselves. So from that point of view, we will be going to get results."

Dundalk's preparation for the AZ game has been hampered by the sheer volume of fixtures they have played in the last fortnight.

Monday night's win over Finn Harps was their fourth game in the space of just seven days and Finn admitted that 'cramming' would be the name of the game in the couple of days leading up to the match.

"Genuinely, we haven’t spoken about AZ," he said. "We don’t really know anything about them, we’ve been concentrating on league games because that’s the way it is, you can’t take your eye off the ball.

"We’ve got a couple of days to recover and get things right for Thursday but when you play away in Europe they genuinely don’t let you train on the pitch for long.

"On Wednesday we probably have an hour that night but they’re strict, they’re there pulling you off the pitch. In that sense, maybe, we’re going to have to look at set pieces which, realistically you can’t do in a ground where there are cameras around; you don’t know who could be watching.

"So that aspect of it is frustrating. Stephen probably would have liked another day at home to do it, but the lads need to recover as well. From that point of view, you’d like the extra day but these are the cards that you’re dealt and you’ve just got to make the most of it."

With all that in mind, many feel that a draw would be a superb result in the group opener in Alkmaar. Finn, however, said that Dundalk only know one way to play and couldn't see them taking any other approach in Holland.

"I think we always play our best football when we try to win the game and Stephen is not the type of manager to go and play for a draw or whatever.

"We haven't been in this position yet where it's a group game and it's not like there's a home and away leg really - it's a group and you have to go and try to get points on the board.

"European games are very exciting and you know you are playing against top-class opposition," he added. I think it raises your game.

"Over the last few weeks we have gathered a lot of experience from playing tough games and now we are concentrating on getting points and seeing how far we can go. Who knows?"