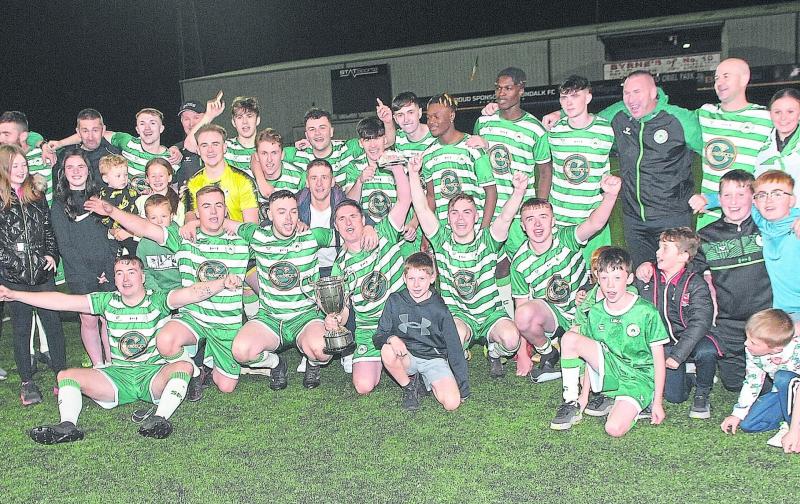 Shamrocks completed the treble of League, Clancy Cup and McConville Cup with a nerve wrecking 4-3 victory over a never say die Rampart Celtic in Casey's Field in front of a huge crowd.

Ten minutes into the match David Ward had Shamrock's ahead scoring from close range, his 15th goal of the campaign. Midway through the hectic first half, Shamrock's had a let off when the crossbar came to their rescue.

Undaunted Rampart piled on the pressure and Lee Wright brought the sides’ level with his 100th goal for Rampart. On 44 minutes Pavel Kloda put Rampart ahead with a stunning shot from 40 metres out.

Stung by this reverse the Castletown men hit back instantly, Aaron Casey scoring from a corner kick inside a minute of Kloda’s strike to send the sides into the break two apiece.

With Robbie Mackin in midfield and David Ward up front proving more than a handful for Rampart, Shamrock's began to boss affairs and when Ward was fooled inside the edge of the penalty area, Dean Brown rifled the spot-kick past Chris McCauley to put Shamrock's 3-2 in front.

Some great goalkeeping by McCauley stemmed the tide of Shamrock's attack, that was until James O'Connor doubled the Fatima sides advantage, with 78 minutes played.

Rampart never let their heads drop and driven on by the hard work of Sean McQuillan, Ryan Watters and Aidan McGuiness, who was moved up to give the battling Sean Bailey some support, the leading goal scorer found the net in the 89th minute, beating goalkeeper Ronan Rooney one on one to make it 4-3.

It was his 21st goal this term and it made him the seasons leading marksman. For the remaining time added on, Shamrock's played keep the ball to successfully run down the clock for victory and grab a historic Dundalk treble.

Players to stand out in a wonderful final before a great crowd were Robbie Mackin, Benji Dada, David Ward and Dean Brown of Shamrock's and Chris McCauley, Aidan McGuiness, Sean McQuillan, Ryan Watters and Paval Kloda of Rampart Celtic.

A minutes applause was observed for Calum Gray member of Shamrock's under 11 squad , before the final began.
Colm McConville, son of the late Brian McConville presented the Cup to Shamrock's Captain Aaron Casey.