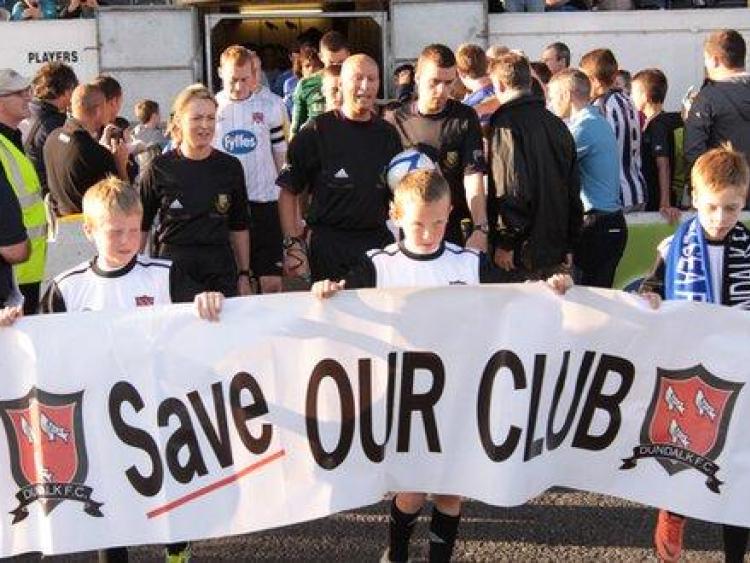 Just hours after the club’s lease was put up for sale by current owner Gerry Matthews, over 100 people attended the meeting. Representatives of the DFC Community Trust and Dundalk FC General Manager Paul Johnston spoke at the event.

One of the supporters behind the ‘Save Our Club’ movement is former Dundalk FC Club Promotions Officer Dean Arrowsmith and he said he was delighted with the response from the meeting.

“It went very, very well. The last three or four meetings that the club have held ended in arguments about this and that but we made sure that wasn’t the case on Tuesday. “We got our point across, we gave the the DFC Community Trust an opportunity to speak and a representative from the club spoke aswell so hopefully everyone will now pull in the one direction now and we can save our club.

“There’s no secret about the situation the club is in at the moment. Everybody needs to get behind us, the Trust or the club to ensure there is a Dundalk FC going forward.”

The fundraising got underway on Saturday night when DJ Baz played in Reilly’s Bar in the Youth Development Centre at Oriel Park while ‘Project Dundalk’, a music concert featuring local artists, has also been organised by supporters for the August Bank Holiday weekend.

Arrowsmith also spoke about some of the other ideas conceived at the meeting.

“We are setting up a text messaging service. We don’t know what the price will be just yet but a portion of the cost of the text will go towards the club. Finn Harps ran a similar initiative a couple of years ago. It costs €600 to set it up but we got the cost of that waived.

“We are also holding a comedy night in the Crowne Plaza. A lot of the comedians are League of Ireland fans and they are doing it for nothing. The Crowne Plaza have agreed to put them up free of charge for the night which is fantastic. The whole event might cost us up to €300 to run but potentially we could make almost €7000 from it.”

The initiative has gathered strength through the use of social media. ‘Save Our Club’ was trending on Twitter last week and the campaign has also helped to inform old players and supporters from other clubs about Dundalk FC’s predicament.

“The feedback from the old players has been brilliant”, said Arrowsmith. “We have a jersey auction that will be up and running soon. Faz Kuduzovic has donated one of his Eintracht Trier shirts. Colin Hawkins has donated three of his old jerseys and Chris Bennion has sent an old shirt down. We also have a signed Andrea Pirlo AC Milan shirt up for grabs.

“The big shock was the amount of fans from other clubs who have got behind it. We’re really appreciative of that”, he added.

“We’re hoping to hold a bucket collection at Oriel Park next Friday against Derry City and Bohemians have offered us the chance to do a bucket collection in our game with them at Dalymount Park on July 27 which is a fantastic gesture from a club who have experienced their own problems in recent years.”

For supporters wishing to donate to the cause, a bank account is in the process of being set up of which details will be announced in the coming days.

“The bank account will be open to the general public to see what money comes in and out. We’ve sat down with the club and discussed it. If money needs to come out for players wages then we have been assured it will be solely for players wages. It will be totally transparent”, said Arrowsmith.