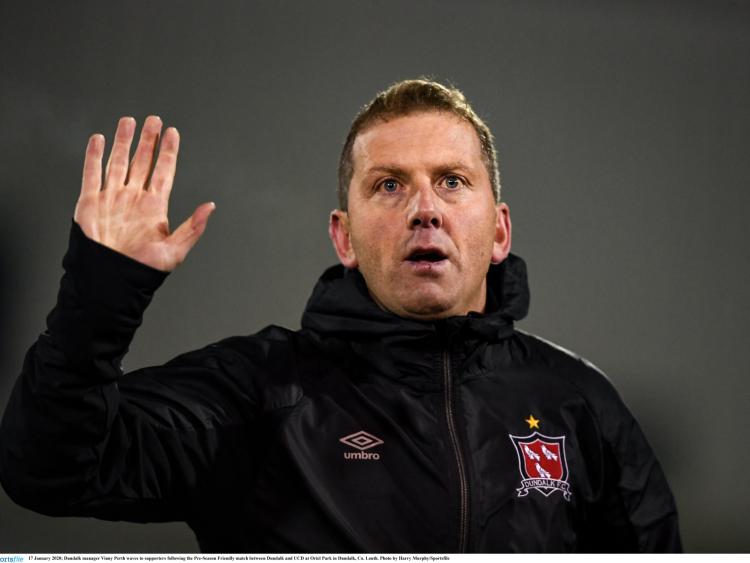 Vinny Perth has made no secret in recent weeks that his primary target is to, again, lift the league trophy. (Pic: Sportsfile)

SSE Airtricity League football returns to Oriel Park this Friday night as Dundalk FC begin their quest for a third consecutive title, and a sixth in seven years, with the visit of Derry City (7:45pm).

Following the conclusion of their pre-season programme, Dundalk were due to face Shamrock Rovers in the President’s Cup on Sunday afternoon, but that game was postponed due to the adverse weather conditions, with a new date still to be arranged among the relevant parties.

Dundalk manager Vinny Perth, though, was, for a long time, adamant that the real start to his second season in charge of The Lilywhites would come with the Valentine’s Day date with Derry.

Perth has made no secret in recent weeks that his primary target is to, again, lift the league trophy.

“We were a penalty shoot-out, last year, away from winning every trophy. You need so much luck to go your way in cup competitions. The league and Europe are what we’ll judge ourselves on internally.

“You’ve got to challenge the group and we’ve got to raise the bar. The bar is that we need to be better at what we do in terms of Europe and the league.”

Despite collecting four different trophies in his first season in charge, Perth remains conscious that he’s invested himself into the unforgiving business that is football management, and understands that he is always just a few bad results away from being scrutinised, or even relieved of his duties.

“I’m driven by fear, I don’t take what I do for granted. I got some personal honours at the end of the season and they’re massive, but in one sense, they annoy you because they make you remember not to rest on your laurels.

“I’m six or 10 weeks away from losing my job at any stage. It’s not something I fear, but I’m driven by it, to make sure you’re working hard so that doesn’t happen. It could happen no matter how hard you try – it is a difficult industry.”

Ahead of the Derry game, it has been confirmed that John Mountney will be unavailable, due to an ankle injury he picked up in pre-season. Darragh Leahy, Patrick McEleney and Seán Murray were all unlikely to be risked for the President’s Cup before its postponement, but could play on Friday night.

Stefan Colovic, the 25-year-old Serbian winger who has signed a two-year deal with Dundalk, is also unlikely to feature on Friday, with the club still trying to finalise his international clearance.