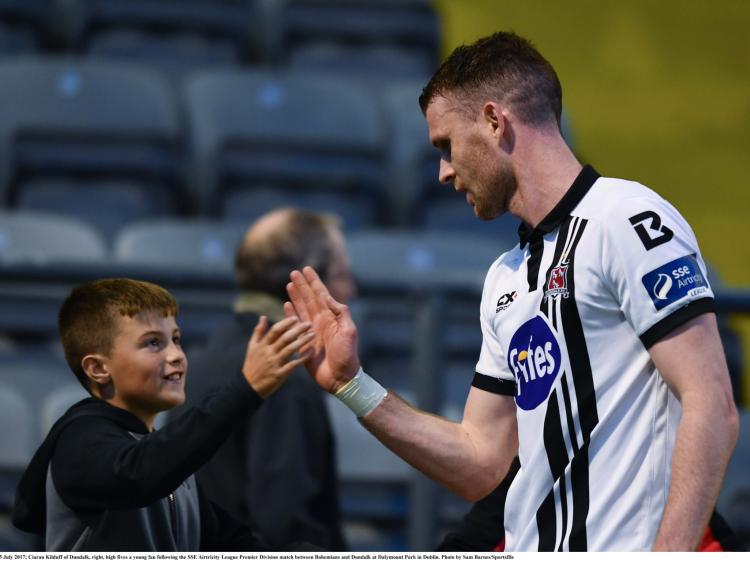 Ciarán Kilduff will be forever etched into Dundalk FC folklore for the two goals, possibly the most lucrative in the club’s history, he scored to earn a draw with AZ Alkmaar, plus a win vs Maccabi.

Ciarán Kilduff will be forever etched into Dundalk FC folklore for the two goals, possibly the most lucrative in the club’s history, he scored to earn a draw with AZ Alkmaar, plus a win against Maccabi Tel Aviv, as The Lilywhites became the first-ever Irish team to score UEFA Europa League points in 2016.

Under 12 months later, the Kildare native would end his 10-year association with the League of Ireland – which also saw him represent Shamrock Rovers (twice), Kildare County, UCD, Cork City and St. Patrick’s Athletic – to join Jacksonville Armada, who played in the North American Soccer League.

Now at the age of 31, he has since returned to his roots and is about to enter his second season with Shelbourne, having scored 13 goals which helped the Dubliners to win the First Division title in 2019.

As Shels returned to the Premier after a six-year stint in the First, there was one fixture that jumped out for Kilduff, who, with his new team-mates, welcomes Dundalk to Tolka Park in the second week.

“When the fixture list came out, I felt like a kid again, looking out for the best fixtures,” Kilduff told The Democrat.

“I’d be lying if I said the Dundalk fixture wasn’t one that I looked out for, for many reasons, but also because Dundalk have been the best team in the country for the last couple of seasons.

“As a player, you want to be playing against the best teams, pitting yourself against them to see how you are, so I’m looking forward to all of those fixtures to be honest. I’ve had a few former clubs in this league, but Dundalk is definitely one that I have fond memories of.

“Obviously, it went well for me and I was part of great things there. I was chatting to Vinny (Perth) only today about old times and how they’re getting on. I still have some great relationships with the club there, but I’m a Shelbourne player now and I’m happy to be, so when that whistle goes in Tolka Park, we want to give them a tough game.

“We’ll be up for every game this year, but let’s be honest, that’s our first home game, the champions coming to our place, so that’s just one that I’m looking forward to. It should be, and hopefully will be, a great occasion to play in.”