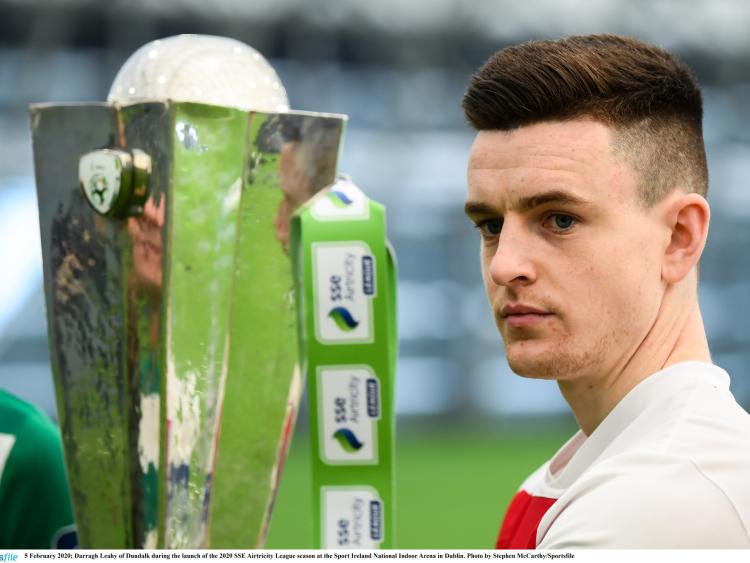 Darragh Leahy is ready to tackle the challenge of competing with Dane Massey for Dundalk FC’s left-back spot. (Pic: Sportsfile)

Darragh Leahy is ready to tackle the challenge of competing with Dane Massey for Dundalk FC’s left-back spot.

Having signed from Bohemians over the winter break, the defender is looking forward to his first season at Oriel Park, but knows he’s going to have to fight for his place.

Leahy hasn’t played a competitive game at club level since August, due to an ankle injury he sustained while playing for the Republic of Ireland U21s, for whom he has eight caps and counting.

“He’s been at Dundalk for a number of years and he’s been extremely successful,” he said of Massey.

“I’m not just going to walk straight in. It will be a very tough challenge, but a challenge that I am willing to take on and it will be good to learn off the likes of Dane, on how successful he’s been, so I am looking forward to it.”

The Dubliner has had a productive pre-season programme with The Lilywhites and was highly impressive in their 7-1 win over UCD, before also getting valuable minutes against CFR Cluj and Longford Town.

“I’m feeling good,” Leahy added. “I was coming back from a little injury when I first joined, so the first week or two, I was with the physios.

“I have played two 45 minutes’ now and I played 70 minutes again last night (against Longford), so yeah, I’m feeling good.

“I still have to improve (my fitness), but it is where it needs to be at this minute in time, so I just want to kick on now and just keep working to try and get fitter.”

Leahy knows that staying clear of injuries will be paramount to holding down a regular spot in a team that he believes will, again, be chasing the domestic treble, as well as an extended European run.

“I just want to play as many games as I can and stay injury free. As a team, we want to go one better domestically and try and get the treble, but obviously, it won’t be easy.

“In Europe, let’s see how far we can get. Hopefully, we can kick on from last year. I’m really looking forward to it, I’ve seen how well they did in 2016, so we’re trying to replicate that now this year.”