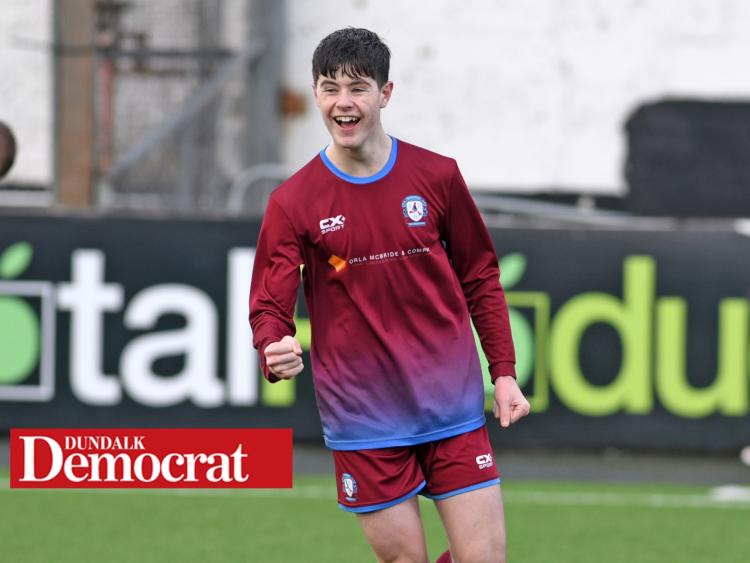 The Friary side got the perfect start when Fintan Brady tapped home with five minutes played.

Quay Celtic climbed to fourth in the table with a hard-fought victory over Termonfeckin at Clancy Park on Wednesday.

After a very even opening 15 minutes, it was Quay who got the vital mark on the scoreboard. Michael Begley’s long ball was chased by Taylor Murphy, who chipped the outrushing ’keeper to put the Point Road side ahead with his fifth goal of the season.

Minutes later a superb cross from Dylan Cahill was rifled home by Begley to make it 2-0.

Midway through the half Termonfeckin were awarded a penalty, but Ciarán Reilly’s well-taken spot-kick was brilliantly saved by Cillian Rice. The netminder came to his side’s rescue in the 35th minute, saving a great effort from Issac Bona, allowing the home side to take a 2-0 lead into the break.

The second half saw both sides squander good scoring chances until the 63rd minute when Joe Gorman was fouled in the box and Dylan Cahill dispatched the penalty to extend Quay’s lead.

With 15 minutes remaining Bona had a great chance to bring his side back into the game, but his header was just over the crossbar. Though Bona was not to be denied, firing home a free-kick from 20 yards to register Termonfeckin’s consolation score.

Both these teams have the credentials of possible Cup winners at the season’s end.

St. Dominic’s went to the top of the league with this victory, in their final match, on Saturday. Their tally of 15 points can only be surpassed by Ardee Celtic in their last game against Glenmuir if they win, to collect a total of 16 points. A win for the Glens means they can amass 18 points.

The Friary side got the perfect start when Fintan Brady tapped home with five minutes played.

Ten minutes later, Aaron Crawford doubled Saints’ lead, firing low into the corner of the net from outside the box. Brian Brady quickly stretched the lead further to put them 3-0 ahead.

A shocked Bellurgan side were rejuvenated when Seán Dawe broke clear to rifle home from the edge of the box, in the 28th minute.

A minute before the break, Ian Arnold shot low and hard to make it a 3-2 scoreline.

Five minutes into the second half Luke Higgins had the sides level with a well-taken score.

Both teams went all out to get the next vital score which came in the 77th minute courtesy of a Brady strike. Within a minute he completed his hat-trick to swing the game Dominics’ way.

In the closing minute he notched his fourth goal to give his side a 6-3 victory.

- Dundalk and District League’s meeting for the U19 Cup draw takes place on Wednesday, February 12, at 7:30pm in Glenmuir’s clubrooms. All clubs are to attend.