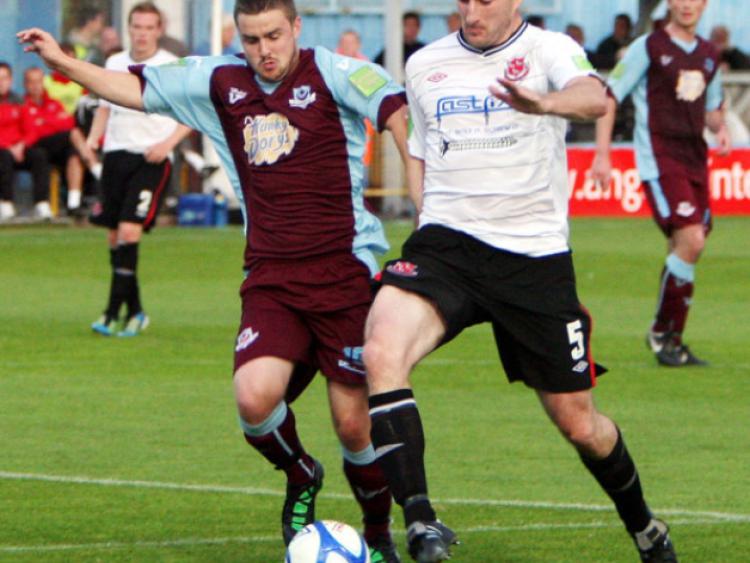 Dundalk and Drogheda United will meet for the 11th time in the FAI Cup when they face each other in the semi-final at Hunky Dory’s Park on October 6. Ahead of the biggest Louth derby in history, we look back at the previous 10 encounters between the clubs.

Dundalk and Drogheda United will meet for the 11th time in the FAI Cup when they face each other in the semi-final at Hunky Dory’s Park on October 6. Ahead of the biggest Louth derby in history, we look back at the previous 10 encounters between the clubs.

The United Park tie ended in a goalless stalemate, Drogheda having a 70th minute goal disallowed.

The replay in Oriel Park was one of the the most emotionally charged games ever in the venerable old stadium. It was an epic battle that saw two players sent-off and five yellow cards issued by referee Paddy Molhall.

A headed goal by Brian Duff, from a Leo Flanagan free-kick in the 40th minute was defended magnificently by Dundalk as the Drogs pinned them back in search of an equaliser.

After getting through this 3rd Round tie, Dundalk went on to lift their 7th FAI Cup, beating Sligo Rovers 2-0 in the final.

Dundalk struck early, Harry McCue heading over the line after 10 minutes with Dessie Gorman making sure it hit the net.

From then until time added on it was Dundalk who had to soak up the pressure until Tom McNulty broke clear to lay the ball off to Larry Wyse who shot home from 15-yards.

The Oriel Park gate was the second highest of the 4th Round, the Shelbourne v Derry City match in Dalymount Park bringing in a staggering 25,000.

Dundalk went on to lose the final, 3-0 to Shamrock Rovers.

The game only came to life in the final 10 minutes after Mick Doohan had given Dundalk the lead.

Colm Tresson grabbed a late equaliser to bring the game back to Oriel Park.

In extra-time Trevor Croly hit the winning goal to give Drogheda their first cup win over Dundalk.

One Bertie Ahern was a spectator at the game.

By the time the sides met again in the cup, Dundalk were playing in the First Division. The Boynesiders had managed to survive in the Premier Division and left Oriel Park with a scoreless draw.

The replay in Drogheda saw the home side prevail on a 3-2 scoreline, the highest scoring tie between the Louth rivals.

John Lester, with two penalties inside three minutes, put the Drogs 2-0 ahead just before half time.

Declan ‘Fabio’ O’Brien made it 3-0 before a rally in the last 10 minutes from Dundalk saw Simon Kelly make it 3-1 with a stunning shot then minutes from time Steven Napier made it 3-2 but Drogheda held on to win.

The sixth pairing of the clubs in the FAI Cup saw them unveil the all new weather pitch in Oriel Park before a 4,152 crowd in the 2005 competition.

A young and inexperienced Dundalk team fell to a 2-0 defeat as Mark Leech, son of the famous Mick, gave the Boynesiders a half-time lead.

A penalty from Damian Lynch saw them safely on their way to a first ever FAI Cup win in Landsdowne Road where they beat Cork City 2-0 before a 24,521 strong crowd in the final.

The last FAI Cup derby was in 2011 when Dundalk prevailed at home after travelling to United Park for a 4th Round cup tie which ended in a 1-1 draw, Mark Quigley scoring for The Town.

Dave Rogers had given his side the lead after five minutes following a pass from former, and now current, Dundalk player Tiarnan Mulvenna.

Quigley’s equaliser came in first half stoppage time and ensured the tie would be sent to a replay.

That game in Oriel Park went Dundalk’s way, Keith Ward hammering home from 30-yards on 25 minutes and four minutes later a delightful lob from Mark Quigley made it 2-0 to the home side.

Drogheda sub Jordan White got a late consolation goal for the Boynesiders.

Dundalk fell at the next hurdle, Anto Flood’s header on 108 minutes putting Bohemians through in a game that marked Peter Cherrie’s 100th appearance for Dundalk.