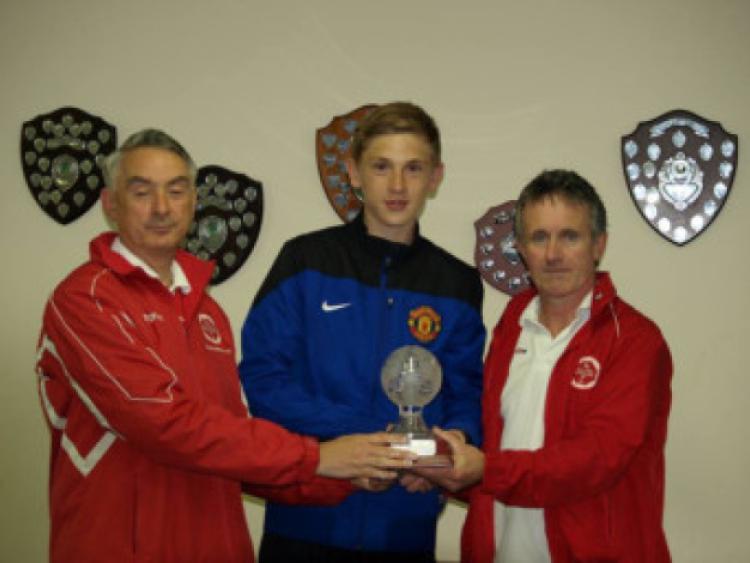 It’s a special moment for any manager or coach of a schoolboys league team when one of their players is snapped up by a professional club.

It’s a special moment for any manager or coach of a schoolboys league team when one of their players is snapped up by a professional club.

There must be an immense feeling of satisfaction, knowing that the hard work put in on those cold nights on the training ground, trying to guide youngsters and hone their skills has all been worthwhile.

But, when that player is someone you have watched grow and develop for the past 15-years, that moment is made just a little bit sweeter.

That is certainly the case for Cronan McCabe, the Rock Celtic U16 manager, who watched one of his proteges, James Dunne, fly to England at the weekend to begin his new life as a Manchester United player.

McCabe has nurtured Dunne with the Seasiders’ schoolboys league team in recent years, but, as he revealed to the Dundalk Democrat last Friday afternoon, his link with the youngster goes back a lot longer than that.

“James has been with Rock Celtic since he was six or seven years of age. I have had him in various Dundalk Schoolboys League squads as well, but I first saw him with a ball at his feet when he was just 18 months old”, said Cronan.

“Him and my son Seamus use to play football in the back garden. I’d set cones down and they’d both dribble around them so it was all started back then!”

The 15-year-old defender returned to his local club and under the watch of McCabe and Ed Smyth, he has flourished, catching the eye of United and securing a four-year deal with the Red Devils.

“Myself and Ed have been delighted with the fantastic strides James has made”, said Cronan.

“He has been rewarded for his absolute commitment, determination and attitude towards the game.

“James has worked doubly hard on improving himself and his technique. For example, he would bring a skipping rope to training to build up the power in his weaker foot.

“It’s very hard to get young lads to do work on their own”, he continued.

“They might tell you that they’ve done it, when really they haven’t– but with James, you knew that he was putting in the hard work at home on his own.

“He has a great outlook on life”, added Cronan. “Nothing was a problem to him. Football has been his life and he has dedicated himself to it and got his reward.”

McCabe feels that this level of determination will only help Dunne’s ambitions of making a name for himself at Old Trafford.

“The first stage of James’s football career is over”, said McCabe.

“The next stage is signing for a big, professional club where everybody in that dressing room is looking to get your position on the pitch.

“Players will be mates during training and before and after games but it’s every man for himself when it comes to getting a place on the team.

“Manchester United will only want the best player in each position, so James has to up his game. He has all the talent, it’s just up to him now.”

McCabe also stated that United’s acquisition of Dunne would ‘make a real difference to Rock Celtic’.

Set up in 1969, the Seasiders now have over 350 players on their books at Sandy Lane and McCabe said Dunne’s move would give youngsters at the club something to aspire to.

“You can’t promote your club any better than having one of your players signing for Manchester United”, he said. “It shows other youngsters what can happen if you really work hard enough.

“Over the years we’ve had the likes of David Ward, Derek Delany and Alan Breen all going to clubs in England or playing in the League of Ireland. It’s great for us and it shows people what our club is about.”