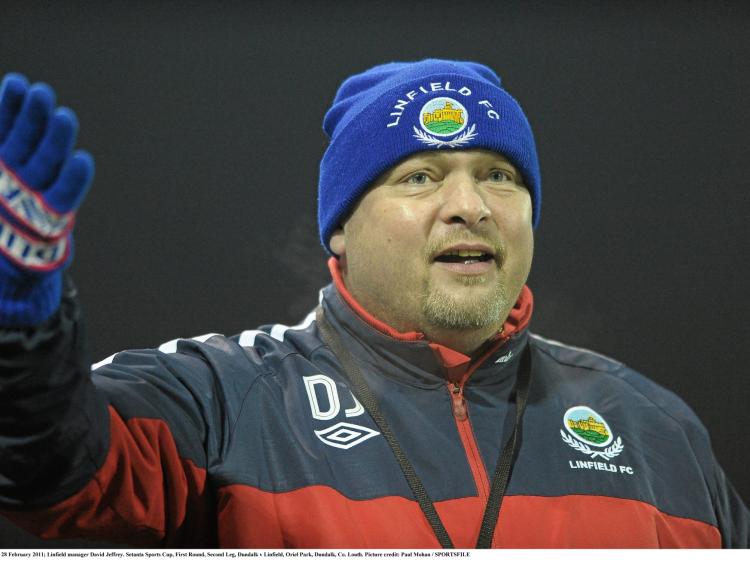 Ballymena United manager David Jeffrey, pictured above as Linfield manager at Oriel Park, has been outspoken on the ‘all-island’ league idea. (Pic: Sportsfile)

“Unless we have some guarantee around European places, it would be like turkeys voting for Christmas.”

Ballymena United manager David Jeffrey is the honest type, and he wasn’t for holding back when the topic of a potential ‘all-island’ league entered the fray after his team’s Europa League win over Faroese opposition last week.

An overhaul of football south of the border has been mooted strongly across several quarters in recent months. Former Ireland international Niall Quinn has been one its leaders and built up attention in advance of a report he co-authored’s release. Frankly, its contents weren’t worth the platform they were given.

One of its major pitfalls, as one would see it, was the utter disregard shown to First Division clubs. In fact, they weren’t mentioned whatsoever. And, although it seems to be involving them somewhat more, this latest motion remains of the idealistic variety.

Kerry millionaire Kieran Lucid is the main driver of the ‘all-island’ league proposal, with Brian Kerr among those said to be hopeful of a merge of the League of Ireland and NIFL, their northern counterpart, in a bid to establish a 14-team top-flight that would be fed into by a pair of 10-team regionalised lower tiers.

According to the Belfast Telegraph, a broadcaster has already indicated their willingness to pay around £1 million for the rights.

This all sounds well and good, but there are too many practical obstacles to be overcome for something like this to function without a major field study backing these claims up.

On a basic level, as Jeffrey was eager to point out, the financial basis from which the top-bracket League of Ireland clubs are working off is far in excess of the Linfields, Ballymenas and Crusaders’ of the North. So what would be the incentive for those teams to concede their present superiority if, as they were getting stronger income-wise, those starting off a higher pier were doing so as well?

There would be major issues surrounding European qualification places, too. At the moment, Ireland have one Champions League and three Europe League qualifier voids, with the North set to lose one of its’ Europa spots, bringing its European places down to three - one and two respectively.

Ballymena will pocket at least £195,000 from their continental opener against NSI Runavik, but winning the tie offers them a next round affair with Swedish giants Malmo, which would swell their fee up to £409,000.

Hence, Jeffrey’s reference to turkeys being in favour of the annual feast. Why, when northern clubs openly acknowledge the superiority of those operating in the south, open themselves for a major financial hit?

And what is the alternative? Would UEFA really allow this new league to have two Champions League places and five Europa spots, the majority of which would, again, be filled by Republic representatives if there was no filter in place?

While, if there was a quota as to how many clubs from either side of the border could qualify, what’s the point of the league? Linfield could finish sixth and yet book a Champions League slot, over Shamrock Rovers in second, just because of their hinterland. Would that really be the case? Would UEFA allow it?

Think of the practicalities of it, too. Many Setanta Cup games brought with it unwanted elements. Violence and crowd disorder. How could this be averted on a weekly basis?

Also, it’s long been a case of the FAI wanting to spread football across the country and every stakeholder would agree that regionalised clubs like Finn Harps, Waterford and Sligo bring greatly to the Premier Division in its current guise.

Arguably the best league of recent years incorporated Wexford, Galway and Longford, as well as Derry, Harps and Sligo.
But the league’s structure seems to be taking another turn towards Dublin, with Shelbourne likely to gain promotion from the First Division, and, potentially, Harps having to fight off possibly another Eastern club in a demotion play-off.

The North has encountered similar problems, with Belfast based sides dominating. Crusaders, Linfield, Glentoran and Cliftonville have shared the last 17 top-flight wins, with regional clubs like Warren- point, Ballinamallard, Dungannon, Lisburn and Newry, among several others, coming and going, but always fighting at the foot of the standings.

What would a joint-top-tier resemble, so? Of the 14, possibly four Belfast clubs, the same from Dublin, Ballymena, Dundalk, Larne, Derry City, etc. It may as well be an ‘east-island’ league with all the financial rewards. The midlands, majority of the south, mid-Ulster and north-west wouldn’t stand a chance. Instead, if they entered, they’d be marooned in the lower tiers, where the income is much less but travel expenses inflate.

And this is all before Brexit. Deary me.