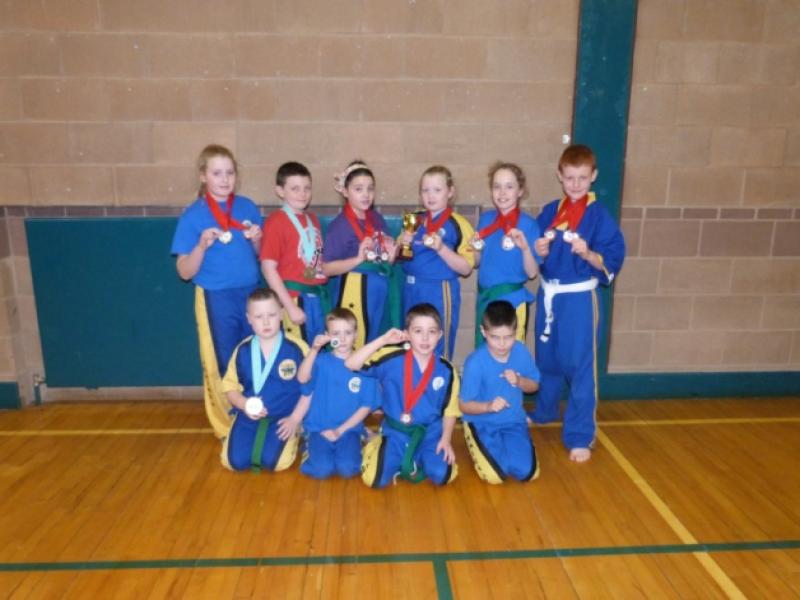 North East Mugendo Kickboxing Club were in tremendous form recently at the North East Open in the Phoenix Centre, Carrickmacross on Sunday and the IMAA Open in the Fairways, Dundalk the previous Sunday.

North East Mugendo Kickboxing Club were in tremendous form recently at the North East Open in the Phoenix Centre, Carrickmacross on Sunday and the IMAA Open in the Fairways, Dundalk the previous Sunday.

Jamie Rafferty performed exceptionally well in the U11 Boys Intermediate Light Contact and was awarded a silver medal. Rafferty gave a fine performance in such a tough section of experienced fighters. This young man is definitely a fighter of the future.

Gareth Jennings gave a very good account of himself at the IMAA Open and was awarded a silver medal in the U10 Boys Novice Light Contact.

Fainche Kelly competed in the U12 Girls Advanced Semi and Light Contact, dominating her fights using excellent timing skills to obstruct her opponents from scoring, receiving a well deserved silver medal in Light and bronze in Semi. Her older sister, Cliodhna also showed exceptional kickboxing skill in the U15 Girls, finishing just outside the medals, but putting on a strong display.

Sorcha Kelly, aged 12 is traditionally not a Semi Contact fighter, but she decided to enter into the U15 Girls category. Despite the height of the fighters in her section, and being the youngest, she excelled herself in her sections. Sorcha made it through to both semi finals in Light and Semi Contact, taking home two bronze medals.

The McAnulty sisters made it to the Light Contact final, where they had to battle against one another for 1st place. Both girls maintained a well controlled fight that showed some excellent kickboxing techniques. The oldest of the sisters, Laura, held her ground against a strong fighter in Semi Contact attaining a bronze medal, and a silver in Light. Shauna became North East Open Champion in Light taking home a gold medal. She also picked up a bronze medal in Semi Contact U12 Girls.

Brother Ryan McAnulty represented his club well in the U10 Boys Light and Semi Contact sections. These sections contained the most fighters, yet Ryan showed great courage as he was the youngest, but that certainly didn’t deter him as he showed some very fancy footwork and fast hands, gaining 4th place.

JP McArdle set the pace and style of his fights in the U10s Boys Light Contact, keeping control displaying fine rounds of kicks and punches winning a bronze medal.

The Magill twins, Pearse and Emmett, were challenged as they moved up into a higher age category at the North East Open. At eight- years of age this was their first time competing in this section, and were up against fighters aged 11 and 12. Emmett’s semi-final fight proved to be one of the toughest fights of the day with both fighters giving a thrilling display of kickboxing, achieving two bronze medals. Pearse kept his distance well in Semi Contact and launched combinations, blitzing from reaching distance, winning a silver in Semi Contact and 4th place in Light.

Micheal Quinn took bronze in the Light Contact and after a hard fought semi final, he took home a well deserved silver in Semi Contact.

Brendan Rafferty showed great determination when he won his way to the quarter-finals in U10 Boys Light contact. From the word go it was clear that Rafferty was determined to win, as he brushed aside all his opponents with a fantastic display of two pointer head kicks, keeping pressure on his opponents. Unfortunately, due to an injury had to retire.

Shauna Loughran won first place in her section, and Lisa Walsh picked up a silver medal at the IMAA Open, and a gold medal at the North East Open. As a coach, along with Desy Murphy, David Clarke, Ryan Walsh, Pierce McGeough and Sean Donnelly, Lisa is very proud of North East Mugendo fighters and would like to congratulate all those who participated.

For training times and further information, find us on Facebook at ‘North East Mugendo Kickboxing’.