Eagles soar above the rest in McAlester Shield 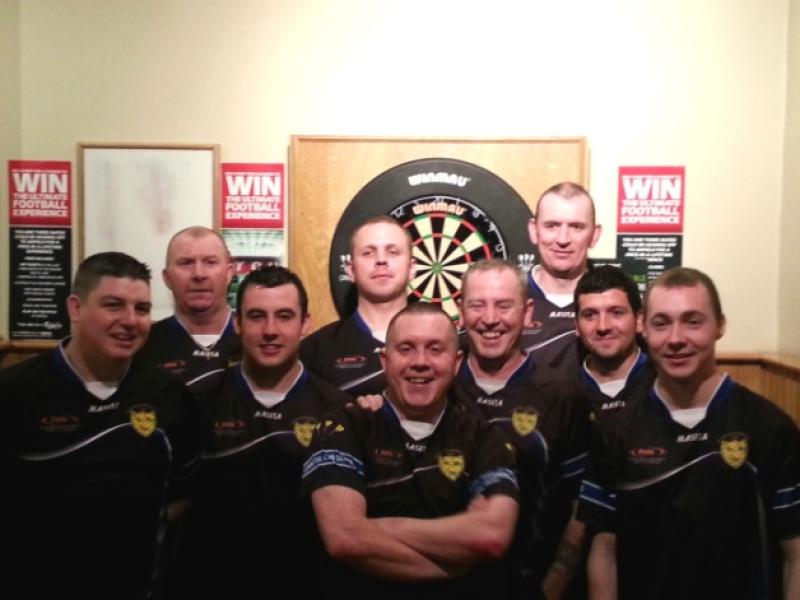 The Avenue Inn was the venue for the last night of competition in this season’s Tuborg DDDL where the Andrew McAlester Open Shield was up for grabs.

The Avenue Inn was the venue for the last night of competition in this season’s Tuborg DDDL where the Andrew McAlester Open Shield was up for grabs.

Four good teams arrived to do battle and it was the Avenue Eagles who proved they were not going to take any prisoners on the night. They faced the Commercial 1896 team who themselves had a number of county standard throwers on their team.

The first game drawn from the hat was Graham Unwin of the Eagles to play the Commercial’s Ray Harte. Graham started very well by hitting three consecutive 100 scores and took the first leg after Ray missed doubles to steal the lead.

This left the Commercial chasing and with Ian Rooney in next against John Donnelly, this was a meeting of two Louth county teammates. It was evenly matched throughout the game with Donnelly hitting the winning double after both players had missed chances to take the lead.

The next leg was much better from Donnelly and he secured the win with a great 105 checkout. It was to continue in this vain throughout the game as Daniel Dunn overcame Alan McMahon 2-0, yet again it was superior marksmanship on doubles that won the game.

Owen Caffrey was next in to seal the victory and despite a poor first leg he gave Brian Fitzpatrick very little chance in the second as he went on to claim the win with a 16 dart leg.

The Avenue were in the final and they were in flying form.

The other semi final, which was running simultaneously, saw the McEntaggart’s team take on The Stag’s and it had no shortage of high scores with Gary Hillard throwing very well but he was unfortunate to meet Sean McMurray in better form. The man from across the border was finishing well and took out 72 to win the game for the Stag’s.

Martin Carville was next in for the Stag’s and he was pushed all the way by Wayne Fry. Wayne was very impressive and narrowly missed a number of big finishes before Martin hit the winning double.

The next game was to be a battle of the captains with Kieran Grimes taking on Paddy Kearney.

“Sunny” took the first game with a cooly executed 86 finish and this seemed to wake Paddy who came back to take the next two legs to win the game.

At 3-0 up, The Stag’s were looking quite comfortable and it was Mickey McMahon and Seamus Rice who decided the next leg. Despite Mickey hitting some good scores it was Seamus who came out on top and ensured the Stag’s held the title of Shield holders at least for one more match.

The top two teams in the league this year met in a final that had all the build up of a classic. Each team was finishing well and each team had high scorers.

The first game in the final saw Danny Maguire throwing fantastic darts to beat Neal Barry. This victory was quickly followed by Owen Caffrey who continued his strong performance from the last match by beating Sean McMurray.

Ray Campbell, the current DDDL singles champion, was next for the Stag’s and he secured the first win for his team by beating Pat Nulty 2-1.

Paddy Kearney was in next and he had an uphill struggle to draw parity as he faced inform John Donnelly, this game went to 1-1 before John Donnelly took the win with great darts in the third leg.

Martin Carville has a wealth of experience and it seemed he was the ideal man to face Daniel Dunn in the next game as the Stag’s were looking to come back and force their way back into this match.

This game, like the one previous, went to a draw match with each man taking a leg each. The third leg started at a blistering pace and high scores were exchanged before Daniel hit the winning double and the Avenue Eagles were crowned Andrew McAlester Shield winners for 2013/14.

The committee of the Tuborg DDDL would like to thank the Avenue Inn for a great setup on the finals night and would also like to publicly thank all the publicans who have supported the league throughout the year.

They would also like to thank all players who made the league as competitive as possible and would encourage them all to participate in the upcoming Louth Trials.

The committee would also like all throwers to support the Stag’s Head Open which is being held at the Linenhall Street venue on June 21.