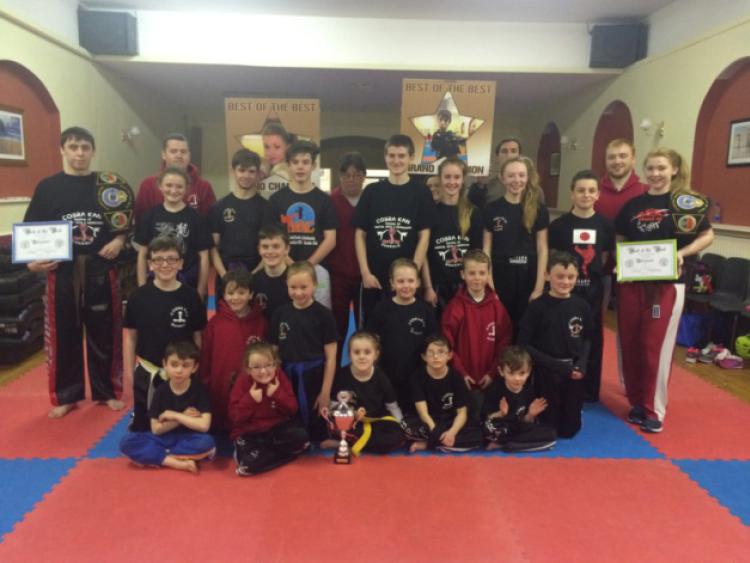 Cobra Kan have done it again. The Dundalk-based martial arts club travelled to Dublin recently to attend an awards ceremony where two students were awarded grand champion belts and certificates.

Cobra Kan have done it again. The Dundalk-based martial arts club travelled to Dublin recently to attend an awards ceremony where two students were awarded grand champion belts and certificates.

Megan Rogers and Patrick Mulligan won their Grand Champion belts by winning three or more tournaments out of four in 2014. The club travels to The Best of the Best tournament four times a year and takes 22 students with them each time.

The two fighters travelled up alongside their instructor Patricia McQuillan and a team of supporters. Both fighters were taken up onto the stage and awarded their Grand Champion belts and certificates.

Cobra Kan were also awarded the Best Supporting Club of the Year for the tournament. Last weekend saw the club travel again to Dublin and had 23 fighters that competed in their various sections of the tournaments.

Both Megan and Patrick were in top form again winning golds medals as so did a number of other fighters. All in all the club were proud to rack up a total of 25 medals home for their efforts. As usual, Patricia was very busy on the day coaching her students to the winning levels which the club have strived to achieve over the first part of 2015.

Last Sunday, a strong team from Cobra Kan travelled to the City West Hotel in Dublin to compete in the eliminations for the WWKC World Championships which this year are being held in Orlando Florida. Last year witnessed 19 fighters from the club earn their places on the Irish team and represented their country.

The club has been very busy since the start of this year already in holding various events and fundraising ideas in order to try and raise as much funding as possible to keep the equipment and gear available and help their members with the costs and expenses associated.

All fighters that are lucky enough to get their places on the Irish team have to fund their own costs, flights, accommodation etc. to go to the World Championships as part of the Irish team as there is no funding given from the state for their hard work and efforts in shaping the young and determined members of the club.