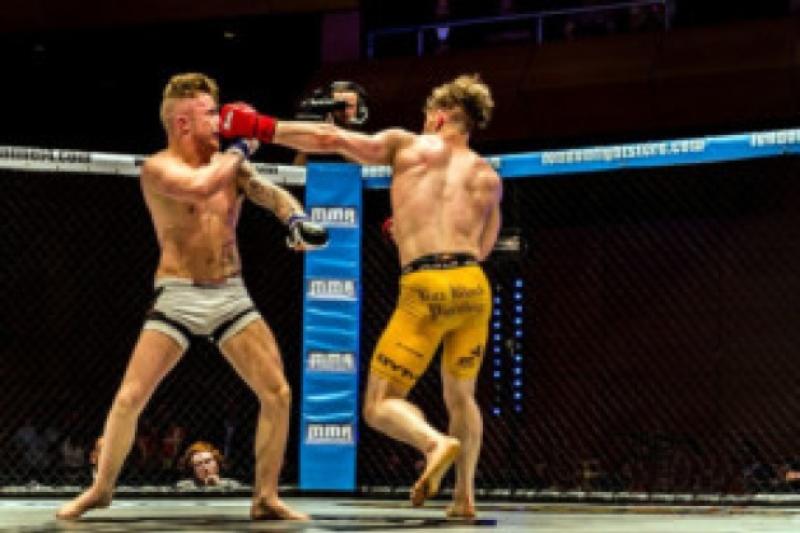 Team Torres continue to make a name for themselves in the world of MMA when they had two fighters acquit themselves admirably at the prestigious Cage Warrior event held in The Helix in Dublin at the weekend which was broadcast worldwide.

Team Torres continue to make a name for themselves in the world of MMA when they had two fighters acquit themselves admirably at the prestigious Cage Warrior event held in The Helix in Dublin at the weekend which was broadcast worldwide.

Cage Warriors is regarded as the biggest MMA organisation in Europe and is seen as the springboard from which to launch a career in the UFC. First up, making his debut Cage Warriors appearance, was thrilling local fighter Matthew Mullen in the amateur card. Matthew was up against SBG’s hot new prospect James Gallagher.

Despite losing narrowly on a split decision, a result which was met with incredulity from many of those at ringside who thought Matt had done enough to secure the win, there were many positives to be taken from his performance.

Matt is the first opponent to take Gallagher the full distance, in all of Gallagher’s previous fights he has finished his opponents in the first round, indeed Gallagher after the fight described Matt as ‘big and tough’ and in the post fight interview expressed how grateful he was to Matt for exposing a weakness in his game when in round two Matt literally spent a full 18 seconds effectively chasing Gallagher around the perimeter of the cage, as Gallagher, after tasting the power of Matt’s solid strikes in the first round, sought to evade the onslaught and further punishment by essentially running before desperately shooting for a takedown, which Matt successfully defended and Gallagher appeared happy to take some respite in the subsequent grappling situation that had evolved.

Matt’s performance was all the more remarkable considering he has not been competing since last year due to competitors pulling out of fights at the last minute, and has been balancing the demands of working full time as a Hedge Fund Accountant whilst training as an amateur, whereas Gallagher has spent the last four years training full time, five days a week, essentially living the life of a professional fighter and has already had two winning fights under his belt this year.

Graham Boylan, the CEO of Cage Warriors, in the post fight press conference singled out Matts fight as ‘a great fight’ which he ‘enjoyed’. Matt’s team mate, Tommy ‘The Ghost’ McCafferty, fought in the professional card, and despite a year long layoff, extended his winning streak to 6-0 by winning by TKO early in round two of his explosive bout when he caught his opponent with a crushing right hand and finished him off with some ferocious ground and pound with the referee stepping in to stop the fight.

All of Tommy’s six professional fights to date have all finished by submission or TKO. Head Instructor Sebastiao Torres remarked that he is delighted to see Team Torres developing into a major force in the sport of MMA and also in the BJJ scene, and with several more competitions lined up for the balance of the year he foresees further success for the Irish and indeed local fighters in the international MMA and BJJ arena.