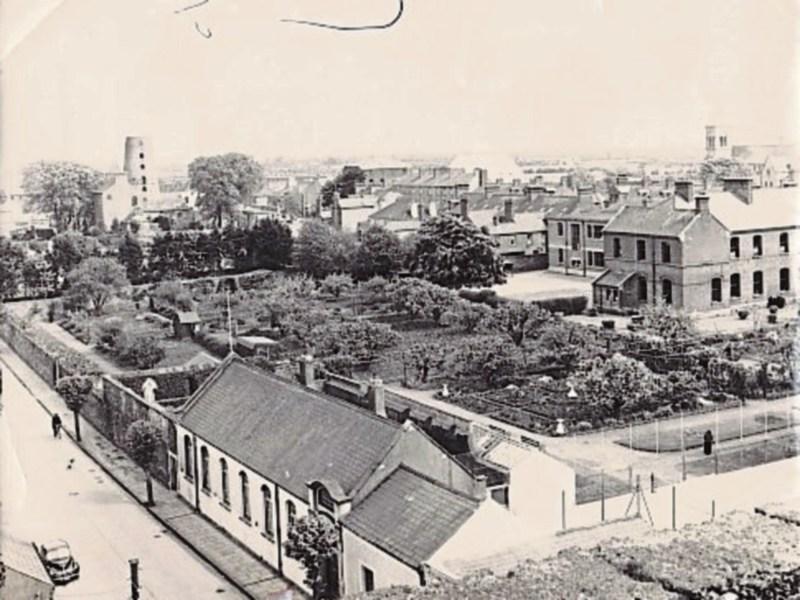 Above is an old photograph which I have come across recently which shows Mill Street and the back of the Convent of Mercy, Seatown, about sixty years ago.

I do not know for certain who took the photograph but am pretty sure that it was Malachy Bellew who lived at 25 Castle Road and took a number of photographs from the top of the old Bell Tower, known locally as 'Castle Road Castle', from where this picture was taken.

Malachy was a pioneer photographer in Dundalk in the middle of the twentieth century and introduced a number of young photographers, including my late brother Paul, to the art and skill of photography in that period. He was most famous for taking the picture of 'The Goal That Never Was' during an F.A.I. Cup tie at Oriel Park in the early 1950s. His nephew Jimmy, printer of Park Street, tells me that his uncle was barred for a number of years from Oriel Park because Dundalk F.C. had progressed to the next round on a 3-2 scoreline against St. Patrick's Athletic as a result of being awarded that score for the local club which Malachy's photograph clearly showed had not crossed the goal-line.

Malachy had worked for Messrs. N. Carolan's wholesale grocery in Earl Street, most of the time in the bottling plant, and had close associations with the 'Dundalk Dundalk' across the street. His brother Michael, father of Jimmy and the late Councillor Tom Bellew, had worked as a lino operator with the Democrat for about forty years until his untimely death in early 1953, incidentally, just weeks before I started work with the newspaper.

The picture shows that gardens of St. Malachy's Convent of Mercy; note the nun wearing an old habit walking in the garden. More importantly, however, it shows, in the foreground, the small school which should bring back memories to many older Dundalk people. Jimmy Bellew tells me that this was his first school, before he progressed to the De la Salle School in Castletown. I have been told that this little school was the sight of the school which was opened by the Sisters of Mercy for local children shortly after they first arrived in Dundalk in 1847. Padraic ua Dubhthaigh, in his Book of Dundalk states that there was great demand for places in this early Dundalk school where domestic crafts for girls were taught. He records that 'over 500 pupils had been enrolled before the workmen on it had completed the fourth classroom'.

The School in the picture is the Convent of Mercy National Primary School where the nuns taught both girls and boys until the Realt na Mara School was opened in 1953.

The grounds of the Convent holds the graves of a number of the early Sisters who formed the first congregation, behind the wall of the old primary School and Jimmy Bellew thinks that I may also have the graves of some of the orphans who died shortly after the St. Joseph Orphanage was opened in 1880.

The photograph shows many other buildings which have since disappeared, such as the old Windmill House which was once used a Militia Barrack at the time of the Boer War and the Sutton's Seed stores beside the Rampart. If you look closely you may spot the old O'Rourke of Carlingford Garage along Seatown Place and notice the fields beyond the Railway Goods Yard which are now covered by private housing. At the time of the photograph, which I judge from the old Morris Minor car parked in Mill Street and lack of much other traffic, Windmill House was behind used as flats. Later the grounds around with were used as a coal yard owned by O'Rourke's.

Perhaps readers may spot other features that I have missed. So, good hunting!

Jimmy who, along with his late son Sean, was a great help to me when I was Editor making the change from 'hot metal' to computer processed printing of the Democrat, tells me that he does not think the photograph of President de Valera inspecting the F.C.A. Guard of Honour outside St. Patrick's could have been in 1966. His reason is that he knows Harry Montgomery had retired as Commander of the local Unit about two years earlier.

Jimmy tells me that he himself appears as a young recruit in the second photograph which was taken outside St. Mary's Church in 1961 as stated.

Jimmy ended up with the rank of Lt. Colonel in the F.C.A.