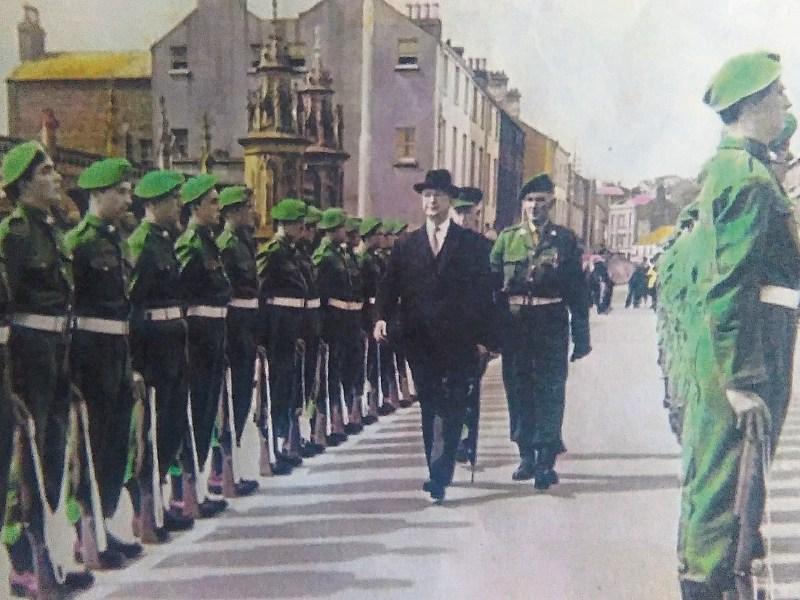 Picture of President Eamon de Valera taken in 1966 on occasion of the 50th Anniversary of Easter Rising, he is accompanied by Harry Montgomery from Blackrock who was in command of the local F.C.A.

Looking through though a number of old photographs and other articles given me by the late Jackie Martin who had been a fitter at the old G.N.R. Works until its closure in 1958, I particularly noticed this picture which had been taken at Roden Place over fifty years ago.

Jackie was a fitter trained at the old G.N.R. Locomotive Works at Ardee Road until its closure in 1958. He originally came from Hill Street but lived in the Knockbridge area in later life.

He wrote that it was a picture of President Eamon de Valera taken in 1966 on occasion of the 50th Anniversary of Easter Rising and that he is accompanied by Harry Montgomery from Blackrock who was in command of the local F.C.A. Unit.

Jackie does not mention any of the other men in the picture but I am sure that many of my readers will recognise some of them.

The interesting thing for me about the picture is seeing how much that the space in front of St. Patrick's has changed over the past fifty years and that some of the buildings in Frances Street have disappeared. Those changes are continuing as I noticed recently that the Woods law offices have left the building in the middle background and moved down to beside the County Museum in Jocelyn Street. Another thing I only noticed recently was that there is still a gateway from the front of St. Patrick's into the back of the old Wood's building.

This is a relic of the time when the old Parochial House Street stood on this site and the gateway would have led into the Parochial Gardens along the Rampart.

Another thing I noticed about the photograph was that, while it must have been originally in black and white, someone must have coloured it afterwards, giving the uniforms a green tint. There are some brown hues in it as well and even a red on background roofs.

This 'colour tinting' was common enough on old photographs but it must be a bit of a mystery younger people who are used to proper colour photography. Some of the tints used were not always very accurate nor even in the correct places!