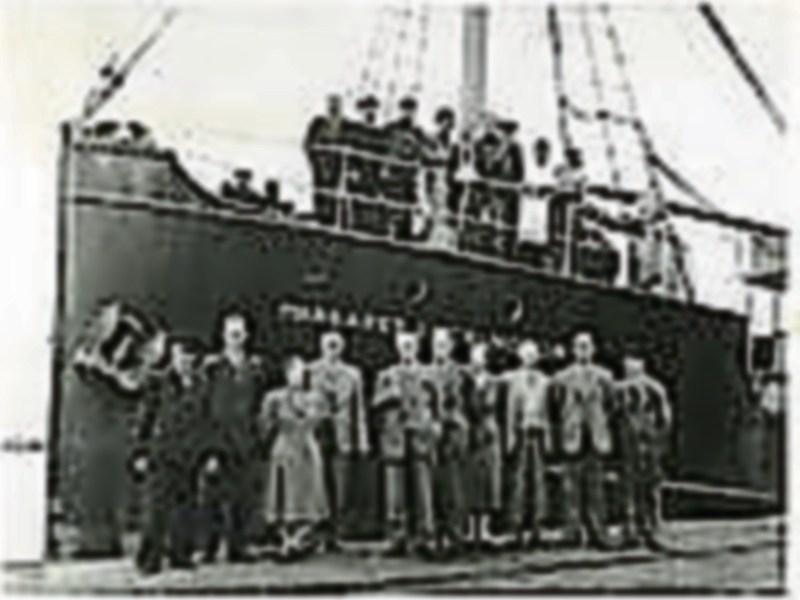 When I worked at Messrs. Connick's coal office in Quay Street many years ago the 'S.S. Margaret Lockington' was still delivering coal at the local quays and was, by that time, something of a local maritime legend.

The little collier had been purchased by John Irwin Lockington in 1920 after the death of his father Samuel Lockington who had founded the local coal importing firm. At that time she had the reputation of being the fastest coal carrying ship of her size plying the Irish Sea. I don't know where she was built but it must have been much earlier because I have read somewhere that she was built for use on the newly enlarged Newry Ship Canal in 1884. The vessel was renamed the 'Margaret Lockington' in honour of John's mother whose maiden name was Irwin.

Captain Jack Taylor was the Master of the 'Margaret Lockington' when she sailed for the last time from Dundalk Quays exactly 60 years ago this week, on June 13, 1957. She was scrapped at Hammond Lane Breakers' Yard, Dublin over the following twelve months.

Her first Master after she was acquired by Samuel Lockington & Co., was Capt. Robert Stowell, a local man. What I did not realise at the time that there was something of a mystery relating to the manner of his death!

Robert Stowell was born in February 1874, the son of a Captain William Stowell who lived at O'Connell Terrace, Barrack Street, and seems to have gone to sea at an early age. He joined the Royal Navy at the outbreak of the Great War and is listed in Tempest's Annual of 1916 as holding the rank of Warrant Officer, St. Mary's Road.

He must has attained a higher rank later as he is stated as having command of a minesweeper, probably in the Irish Sea.

By a strange twist of fate his brother Daniel died aged only 33 when he was serving as a merchant seaman on the S.S. Dundalk in the very last weeks of the War when it was struck by a torpedo fired by a German submarine coming out of Liverpool on October 14, 1918. Daniel, who is commemorated on a plaque about the disaster in St. Patrick's at Roden Place, was not the only member of the Stowell family to die as a result of the Great War, his brother George, again according to Tempests' Annual, died in May 1918 while serving at the Front, as a Corporal in the 4th Hussars.

Robert had married a local girl Mary Frances Wynne in January 1908, according to family internet chatter, without the approval of his parents, as they had 'expected him to marry better than a cork cutter's daughter'. She was considerably younger than him, born in June 1881. By 1916 they had two daughters and she was to mourn his untimely death six years later until her own death in 1965.

After the War Robert was appointed Captain of 'S.S. Carlingford', another Lockington collier, and in January 1921 he was made Master of the newly acquired 'Margaret Lockington'. His appointment ended in tragedy less than two years later when he was found dead in his bunk on the ship on the morning of Christmas Eve 1922 while berthed at the quays at Ayr on the west coast of Scotland. At an inquest held later a jury ruled that the Captain had died accidentally, as a result of a fall on deck on the previous evening. Strangely his death was not registered until the following October in Ayr but I understand his remains were taken home to be buried in the family plot at Castletown Cemetery.

The outcome of this inquest never satisfied his widow who died still believing that her husband had been murdered. Sadly in a way, she was not buried with her husband but was laid to rest at St. Patrick's cemetery Dowdallshill in January 1965.

She may have had some grounds for her belief because, although she had been been invited by letter to attend the Inquest, she had been unable to do so because she was caring for two young girls, one of whom was unwell, and she does not appear to have been legally represented at the Inquest. It seems that she had been informed that he had been stuck on the head as a result of his having dismissed a sailor for 'bad behaviour'.

It would be very difficult to discover the truth of this incident at this remote distance in time of nearly 100 years but it might make a very interesting 'cold case' study for some young forensic historian who has time to trace to old records.

One of the things about the story that strikes me is that a provincial Scottish Inquest jury does seem a very appropriate court to consider the death of a ship's captain aboard his own vessel, a very serious matter in those days. I recall attending several inquests where the evidence was far from satisfactory and one in particular where the foreman demanded that the gardai should seek more witnesses into the death of a young woman who had downed after falling from a ship moored at the local Quays. Since then the law has been altered so that juries, in this country anyway, are limited to finding as to 'Where, when and how' a death took place and not to make any recommendations in relation to possible prosecutions.

Another thing that occurred to me was that Robert Stowell's death occurred at a time when the State of which he was a citizen was barely one year old and there could not have been a proper investigative unit set up in this State to deal with deaths like this. This matter is presently an important topic in relation to investigation into persons suspected of carrying out acts of terrorism in other counties who are or have resided here. I only hope that this process will not get even more complicated as a result of Brexit and the Border near us which will, inevitably, come into existence!