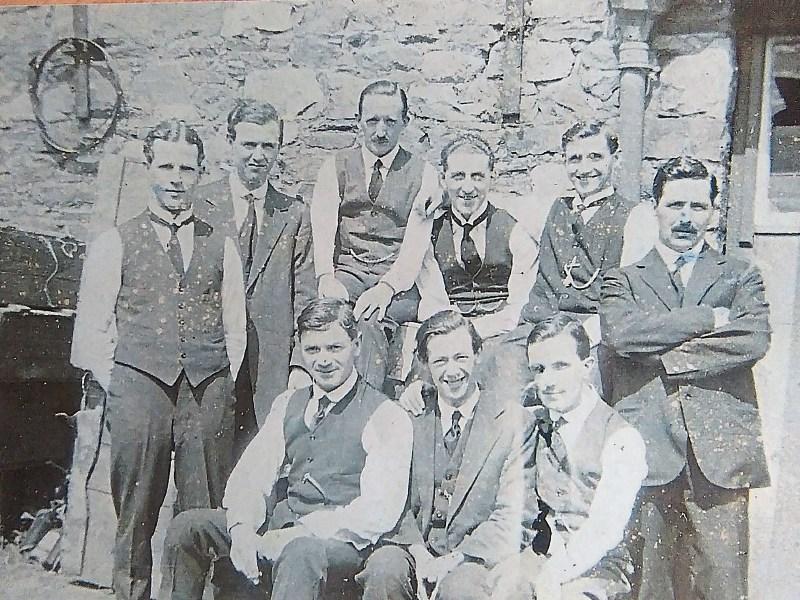 A reader of these notes, who does not wish to be identified, has sent me an interesting group of photographs of people who were connected with the wholesale grocery business of H. Backhouse & Co., at 24/25 Clanbrassil Street, Dundalk at the beginning of the last century.

He was unable to supply names for all but the main photograph is of a group of young men who were on the staff of the company in 1916. He says that the man in the centre of back looks like H.C. Backhouse (who was a son the founder of the company in 1845, Henry Backhouse). The person on the extreme right was J. F. O'Rourke from Inniskeen, who was a director of the company. He was uncle of the late Aiden O'Rourke who was managing director of the coffee shop in the basement of the building up to about thirty years ago.

The original Henry Backhouse started when he purchased a grocery business from George Sheckleton who was a brother of Alexander Sheckleton, who established the Iron Foundry at the Square in 1821 which later was purchased by Edward Manesty, who was involved in many Dundalk enterprises in the late 19th century. Henry greatly expanded the business which included that of wine, spirit and tea importers, a pharmacy and a mineral water manufacturing plant. The company became limited in 1926 and continued to dominate the wholesale grocery trade in town until the end of the last century. The pharmacy still continues to trade on the opposite of the street at 71, Clanbrassil Street.

The family lived at 'The Retreat' in Bachelors Walk, later the home of George O'Hanlon Watters, extensive bacon curer and retailer at 15/16 Clanbrassil Street, whose son Fr. Felix Watters, S.M., a Marist Father, was killed by a sniper in Dublin during the 1916 Rising Week.

The Backhouse family were greatly affected by the Great War and one of the most interesting photographs is that of Captain Church Backhouse, the man who appears in the larger group photograph. He seems to have survived the War but two of his sons served in front lines and one of them, Gerald Lovell Backhouse was killed on August 2, 1916, while serving with the Royal Flying Corps. He is listed in Tempest's Annual as serving originally with the 3rd Battalion of the Norfolk Regiment but was transferred to the Flying Corps and died in an aerial action. The younger son Weston, is listed as being a 2nd Lieutenant in 1916 with the Royal Field Artillery which been stationed at Dundalk Military Barrack at the start of the Great War. Weston was only 19 in 1916, according to the 1901 Census and seems to have survived the War.

Interestingly, another Henry Backhouse of Rochdale, who appears to have been a relative, died in unusual circumstances during the Great War. Holding the rank of Lt./Colonel, he had commanded a battalion that been involved in the Allied landings at Gallipoli in April 1915 where he was wounded.

He was hospitalised in Egypt, recovered and was being taken on a liner, the S.S. Persia, to rejoin his regiment when it was sunk by a torpedo fired by a German submarine in the Mediterranean, off Crete, on December 30, 1915. He was listed as 'drowned at sea' and his remains were never recovered.

The Backhouse family were Church of Ireland protestants who worshipped in the Green Church and probably Loyalists at the time of the Home Rule agitation. Nevertheless, they had good relations with their Catholic fellow townspeople, employees and customers. This fraternity to Dundalk folk served them well at the time of the War of Independence and explains why the company prospered long after the establishment of the State in 1922.

The photographs probably were kept by a member of the O'Rourke family, who were also prominent local business people.

The donor has kindly consented to them being published in the Democrat and I hope to use them at a later date.